A report from Mobile Geeks suggests the Samsung Galaxy Note 8.0 could start at €450 for the 16GB version in Europe,

Mobile Geeks says the rumor also comes with a possible February 10 release date. February 19 is a week before the start of Mobile World Congress, where Samsung will likely launch the new 8-inch tablet, however. It wouldn’t make sense for Samsung to release a new Note device without first announcing it on stage 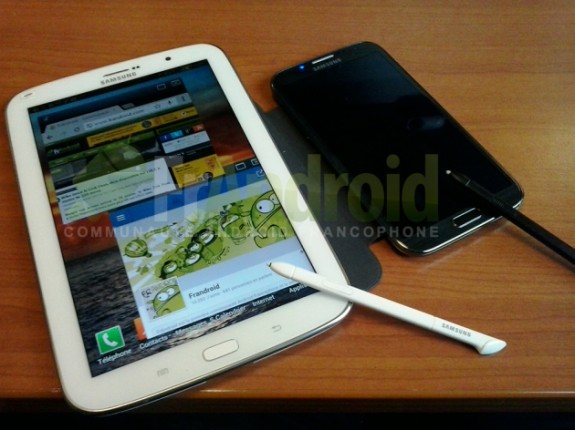 For the February 19 release date to happen, Samsung would likely have to announce some sort of event before that date. Otherwise the date seems unbelievable.

The Samsung Galaxy Note 8.0 was recently spotted in a number of photos which show a device that looks a lot like an enlarged Galaxy Note 2. Leaked specs for the device say it will use an 8-inch 1280×800 display. That’s same resolution as las year’s Galaxy Note 10.1, which means it will have a higher pixel density than the 10.1-inch tablet.

Leaked photos also show the Galaxy Note 8.0 has a speaker grille similar to that of a smartphone, as well as a phone app. Mobile Geeks also seems to indicate the tablet will have telephony capabilities. It seems unlikely that Samsung would advertise the device as a phone instead of as a tablet, however.

The leaked specs of the device say it has 3G HSPA+ radios, but not 4G LTE capability. There is a chance it will gain 4G LTE if it makes its way to the U.S., however.

Like all other recent Note devices the Samsung Galaxy Note 8.0 will have an S Pen stylus, and the ability to run multiple apps side-by-side.