The Samsung Galaxy Note is a speedy superphone thanks to the dual-core processor and AT&T’s 4G LTE network. While speeds weren’t so impressive on HSPA, now that I have my review unit working on LTE downloads are much faster.

I used the SpeedTest.net app in three different locations in Manhattan (NYC). The speeds weren’t consistent each time, but were nice and fast overall. 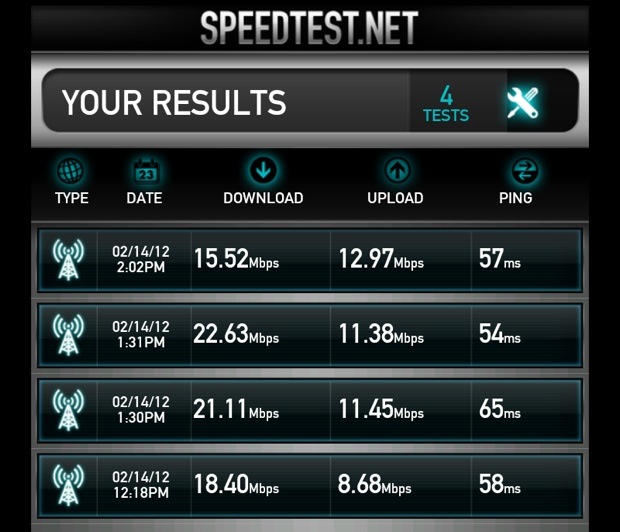 How does this compare to Verizon’s LTE speeds? Here are speeds recorded for some recent Verizon Android phones:

So here in New York AT&T’s LTE is on a par with or besting Verizon’s LTE at the moment. Keep in mind that AT&T’s LTE is newer and there aren’t as many customers on it. Things might slow down a bit as more people get on the network as they did with Verizon. Still, even “slow” Verizon’s LTE is plenty fast. As long as AT&T’s LTE does the same Galaxy Note users will always enjoy a speedy phone.

Seeing these speeds in New York City is a special treat as the carrier has had difficulty in the past with network overload and slowness. Those days appear to be over, at least for Galaxy Note owners.