Samsung could be preparing to release at least one of its many new Android tablets just in time for Valentine’s Day, all starting with the massive 12-inch Galaxy Note Pro tablet. Offering the same S-Pen features as previous Note devices, only in a huge 12.2-inch device.

Announced last month at CES, the Samsung Galaxy Note Pro 12.2 tablet has a lot to offer, but according to latest reports out of Engadget it will be coming at a big price. While nothing’s official from Samsung, US retailers have listed the new tablet as being available on February 13th, but with a crazy $850 price point. 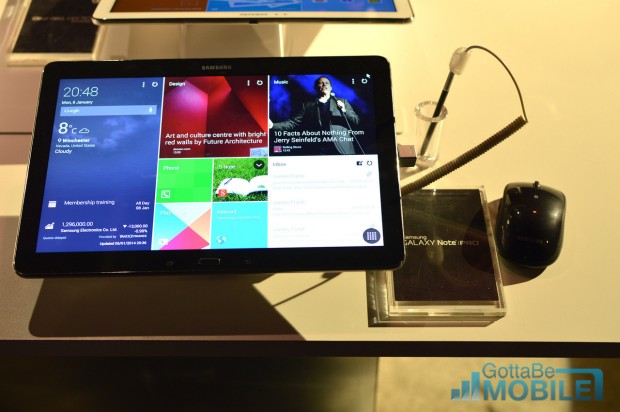 At the moment Samsung has yet to unveil official pricing, release date, or even pre-orders for the new tablet, so while this could be accurate information we’re expecting these details to change once released. With Apple’s iPad Air no where near that price (with similar storage options) we can’t see Samsung realistically charging that much, but we’ll have to wait and see.

The 64GB Galaxy Note Pro 12.2 is the item being spotted, offering tons of storage and Android 4.4.2 KitKat all on a brand new 12.2-inch tablet. As a comparison, Apple’s iPad Air 64GB is just $699, with even 4G LTE coming in at $829. Office Depot has the new Note Pro shipping a day before Valentine’s, but we’ve yet to hear anything from Samsung or partnered carriers.

However, multiple reports already suggest at least one US carrier will offer the tablet, Verizon, but we’re expecting more to follow in the coming weeks. Sadly the model shown above for $850 doesn’t include 4G LTE, which leads us to believe the pricing is only a placeholder, and will be replaced once official details have been revealed.

The Galaxy Note Pro 12.2 was impressive during our time with it at CES, but $850 is a bit much for something that still won’t replace out laptop or desktop. Expect more details and pricing from Samsung themselves in the coming days or weeks.