At the Consumer Electronics Show, Samsung had announced a new larger-screened Android tablet in the form of the Galaxy Note Pro 12.2. The Galaxy Note 12.2 bears a 12.2-inch display with a resolution of 2560 X 1600-pixels, making its screen better than most 12- or 13-inch Windows tablets and laptops on the market today.

Like the Galaxy Note 10.1 2014 Edition that we had reviewed earlier, the Galaxy Note 12.2 bears a similar design aesthetic with a slim side profile and a faux leather back cover and stitching that gives it a premium feel. Additionally, the leather backing helps to improve the ergonomics of the larger tablet as it makes the Note Pro 12.2 less slippery to hold when compared to Samsung’s old material of choice, glossy plastic.

As part of the Galaxy Note series, the Note Pro 12.2 supports Samsung’s S Pen stylus, which is based on Wacom’s active digitizing technology for more precise input on the tablet. Like the 2014 Edition tablet, the Note Pro also features special pen commands through the Air Command menu, which makes it easier to create screenshots, clip images to a scrapbook, and launch smaller floating windows called Pen Windows for ease of multitasking. 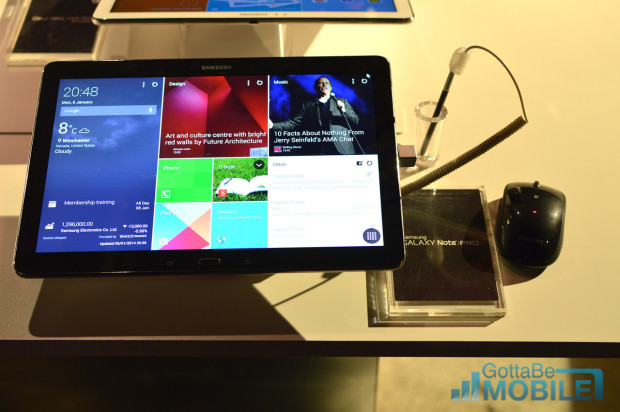 Speaking of multitasking, the biggest change to the large screen tablet is that it now supports simultaneous multitasking of up to four apps. Rather than having to access multitasking through the drop down menu, now a simple swipe command from the right edge of the tablet inwards towards the center launches the Multi Window View so you can click and hold, and then drag and drop the apps you want to multitask into the main frame.

Apps inside windows can also be resized.

There are also some notable changes to the visual experience of this Android 4.4 tablet. Samsung is now concealing Android as much as possible and we’re seeing an even more Samsung-branded experience with the Note Pro 12.2. The main screen now is dominated by a customizable Magazine UX interface, which is similar to what Samsung had implemented on the Galaxy Note 10.1 2014 Edition, but this time it’s more integrated with the rest of the experience rather than feel like a disparate add on.

The Magazine UX is very similar in functionality to HTC’s Sense UI on the HTC One in that you have the Magazine UX with panels so you can quickly access information speedily and efficiently. Additionally, you can also swipe over to the traditional homescreen for apps shortcuts and widgets. 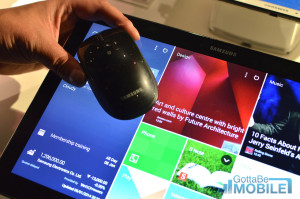 Additionally, the Android bar at the top is now hidden until you swipe down. Swipe down again and you access the new notifications menu. No longer do you have the cartoon-like widgets on the drop-down notification menu. Like Apple’s iOS 7, now the widget images have been flattened for a cleaner, simpler appearance.

In terms of the Android capacitive navigation keys, the Note Pro 12.2 replaces the menu key for a multitasking key. The change is likely due to Google’s change as the menu button has now been moved to inside the app for a more consistent Android experience.

Samsung also has an accessory Bluetooth mouse for the Galaxy Note Pro 12.2 that will allow users to use the tablet as a display and interact with the tablet via a Bluetooth keyboard and mouse.