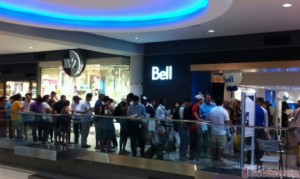 While the U.S. may have to wait until August to see the arrival of the Samsung flagship Galaxy S II smartphone, Canadian customers who are now being treated to the handset with the launch on Bell Canada are being greeted with long lines. Typically not seen for the launch of smartphones outside of iconic flagship exclusives, like the Apple iPhone and the Sprint EVO 4G smartphone when that handset debuted, Mobile Syrup reports that at one carrier store in Canada there was a line of about 70 people.

It’s unclear how many units Samsung will move on launch weekend in Canada. The Korean electronics giant had reported that the Galaxy S II is the company’s best selling smartphone.

When the handset launches in the U.S., it will have to compete against the HTC EVO 3D on Sprint, the T-Mobile Sensation 4G, the Motorola Droid Bionic on Verizon Wireless, along with other capable phones.