Of the three national carriers that are launching the Galaxy S III in late June–AT&T, Sprint, and T-Mobile USA–only two carriers have an operating 4G network of some variety when the third-generation flagship Samsung smartphone launches: T-Mobile and AT&T. In this article, we’re going to test out the fastest mobile broadband networks available to both these 4G carriers and see what the resulting speeds are.

AT&T has 4G HSPA+ and 4G LTE networks up and running, and its Galaxy S III device will support both protocols and will default to 4G LTE where available. AT&T’s 4G LTE network is boasted as being 10 times faster than its 3G network and up to 3 times faster than its HSPA+ network. T-Mobile USA has one of the fastest HSPA+ network available and the carrier has announced plans to switch to LTE. T-Mobile’s variant of the Galaxy S III is limited  to HSPA+. Lastly, Sprint, a carrier that was the first in the U.S. to deploy 4G with WiMax technology, is making the switch to LTE. Unfortunately for the CDMA/EVDO Now Network, that switch is still on-going and Sprint doesn’t yet have 4G LTE deployed. That means Sprint owners who are early adopters of the Galaxy S III will be stuck on 3G CDMA/EVDO speeds. That said, when LTE is available, Sprint’s variant will be able to hop onto 4G LTE and its Galaxy S III is an LTE-ready device waiting for a network.

AT&T was able to get download speeds between 8-30 Mbps in the San Francisco Bay Area in Northern California where its LTE network is available. The Galaxy S III managed downloads between 2-10 Mbps on AT&T. 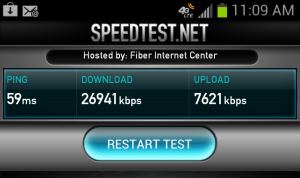 On T-Mobile’s HSPA+ network, speeds were not bad and we’re seeing latency levels almost comparable to LTE with low ping rates, which is a good thing. Download speeds hovered around 10 Mbps and uploads were between 1-3 Mbps. 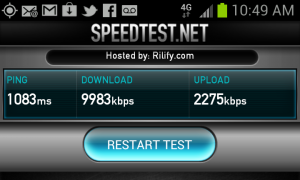 In general, T-Mobile’s HSPA+ network is nothing to scoff at. Most users will appreciate the network and you generally won’t be able to notice a 10 Mbps network compared to a 20 Mbps LTE network on a smartphone. Streaming videos, music, browsing the web, checking email, and updating Facebook were speedy on HSPA+ on T-Mobile.

The area that users may be concerned about is if they use their phones for tethering. Single device tethering is fine, but tethering multiple devices and users to the same Galaxy S III for a hotspot using T-Mobile as its backbone may slow down speeds more quickly than the more generous speeds of AT&T’s LTE. That said, HSPA+ does have a strong advantage going for it in the form of battery life. HSPA+ is less power hungry than LTE and you’ll be able to squeeze a little bit more power out of your T-Mobile Galaxy S III than an LTE Galaxy S III on AT&T.