Users hoping to use a wired connection to display the contents of their Samsung Galaxy S III onto their TVs will have to purchase an entirely new and updated MHL connector to connect the newly launched smartphone via an HDMI connection tot heir HDTV. Unfortunately, Samsung had made some changes to the device’s connector pins that makes the Galaxy S III incompatible with older MHL connectors, like those used on past Samsung phones like the Galaxy Note or Galaxy S II or HTC phones. 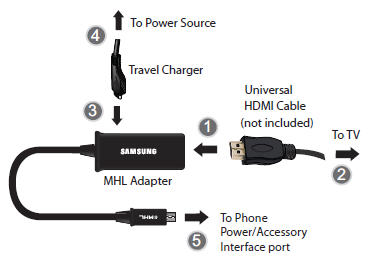 The MHL connector essentially connects to the Galaxy S III’s micro USB port and allows users to connect an HDMI cable from the connector to their HDTV. Also required is a power cable, so users can connect the micro USB charging cable to the MHL adapter as well to power the whole setup.

With an MHL cable, users can mirror the content of their phone’s display onto the HDTV. In addition to using an MHL cable, in the past, various Samsung smartphones have also supported wireless capabilities to send photos and content to a compatible WiFi-enabled HDTV set.

The change to the MHL connector was discovered by UK retailer Clove Electronics as was recently reported on The Verge. According to the retailer, the new MHL cable only supports 1080p HDTVs and does not work on 720p sets.

It’s unclear if with the design changes to the new MHL connector accessory if Samsung has implemented new or improved feature sets.