SquareTrade took to the streets with the Galaxy S III and the iPhone 4S for a series of drop tests to see which phone survived a drop from ear level, damage from a kid playing with the phone and a drop off of a moving car.

SquareTrade offers warranties for smartphones like the iPhone 4S and Galaxy S III, which is the reason they put these phones through drop tests.

Check out the carnage in the Galaxy S III vs. iPhone 4S drop test video below.

The iPhone 4S uses a glass front and back, which is chemically strengthened, while the Galaxy S III has a plastic back with a Corning Gorilla Glass 2.

I don’t recommend choosing a smartphone based solely on a drop test, especially because the damage caused varies greatly based on where the phone strikes the pavement. 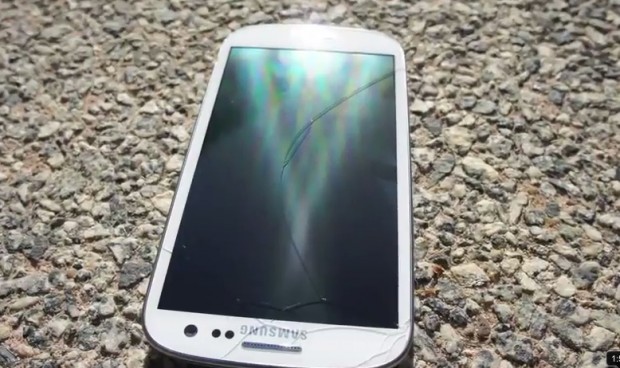 The Galaxy S III doesn't handle a drop from ear height too well.

Still, these incidents highlight common drop situations so it’s nice to see how a phone reacts to a drop. This is one of the reasons I recommend insurance, a warranty or a good case on most new smartphones.

According to SquareTrade, one in four smartphones have been damaged by kids, likely when mom or dad handed the phone to a child to play with, which is another good reason to make sure new phones are protected.

The Samsung Galaxy S III is available for pre-order on Verizon Wireless on June 6th at 7 AM and will go on sale at T-Mobile on June 21st.