A new Samsung Galaxy S3 bug could end up costing users money on their monthly bill thanks to an overactive built-in browser that is reportedly downloading more images than it needs.

This bug, which is part of the built-in browser downloads more images than it should, resulting in higher data usage and longer load times according to a new report from researchers at the University of Massachusetts.

This report found that the Samsung Galaxy S3 built-in browser was slower and made more requests for data than other browsers on WiFi and on cellular data networks. Because of a problem with the browser, the Galaxy S3 downloaded more images, resulting in a downloads of 3.5 times more than a desktop browser in one test.

The good news is that the technology causing higher downloads is not widely used yet, and avoiding this is as simple as picking a new browser like Chrome. 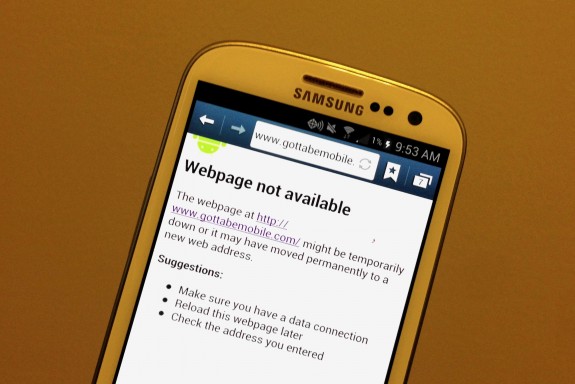 The Samsung Galaxy S3 uses 3.5 times as much data on certain websites according to a new report.

Tech21 reports that researchers discovered the issue while testing a benchmark tool on Wikipedia using multiple devices and browsers.

When the Samsung Galaxy S4 encounters a webpage using the srcset tag, it downloads all the images available instead of just downloading the one it needs. The srcset HTML attribute is designed to allow devices like a smartphone, tablet or high-resolution notebook to download the right size image for the screen to deliver a better look as well as faster downloads.

Users can avoid any of these issues by switching to a new browser like Google Chrome for Android which users can quickly make the default browser. In addition to this change, Samsung should have time to fix any issue here before the mass rollout of srcset. Chrome still offers a better user experience with tab syncing to the desktop so tabs are always at hand and the ability to keep login information synced between devices.

Researchers will share the study this week at a conference, which may shed more light on the issue.