The Samsung Galaxy S3 will arrive in a new color on Sprint this April according to a leaked photo and information.

This device is reportedly just a purple Galaxy S3, not the rumored Galaxy S3 refresh that may join the Galaxy S4 in the coming months. 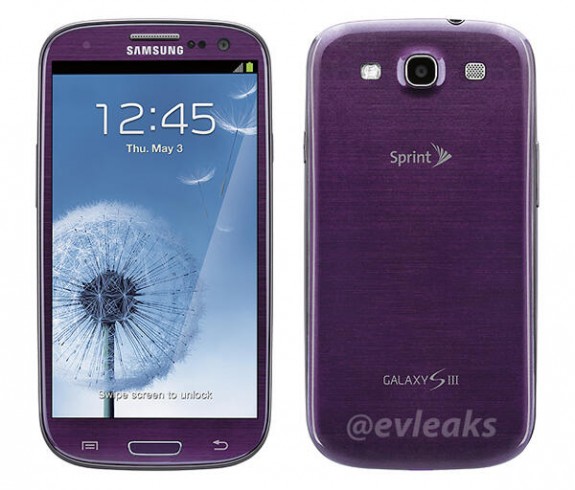 The image comes from evleaks, a normally reliable source of smartphone leaks and images. According to evleaks the purple Galaxy S3 is destined for Sprint in Mid-April. This would put the Samsung Galaxy S3 in purple on Sprint just weeks ahead of the U.S. Galaxy S4 release date.

The posted image, likely a press render, shows a royal purple Samsung Galaxy S3 with a Sprint logo on the middle of the back of the device.

Bright and bold colors are nothing new for Samsung, which has released the Galaxy Note 2 in numerous color options including martian pink, amber brown and ruby wine. Samsung keeps most of the fancy Galaxy Note 2 colors for carriers in foreign countries, but it appears that the purple Galaxy S3 will hit Sprint soon.

The Samsung Galaxy S3 features a 4.8-inch display with Gorilla Glass 2 and includes features such as NFC for payments with Google Wallet and using S Beam to share documents and photos. The Galaxy S3 runs Android 4.1.2 and can monitor a user’s eyes to keep the screen active.

Rumors point to the latest Galaxy S4 eye and motion controls to arrive on the Galaxy S3 Android 4.2 Update, but Samsung made no announcement about this possibility when it announced the Galaxy S4 last week.