In the next six months, one of every eight Samsung Galaxy S4 devices sold will be broken by the owner thanks to a drop, dunk in a toilet or worse.

According to a new set of data out from SquareTrade, Android owners need to be more concerned with accidental damage than from someone who will steal their new Galaxy S4. The company claims Android smartphones like the Samsung Galaxy S4 are 13 times more likely to suffer from water damages, drops and cracked screens than a loss or theft.

This is an important statistic to keep in mind as the company claims one in five Americans plan to buy the Samsung Galaxy S4 and combined Americans spent $7.2 billion on damaged Android phones in the last six years. 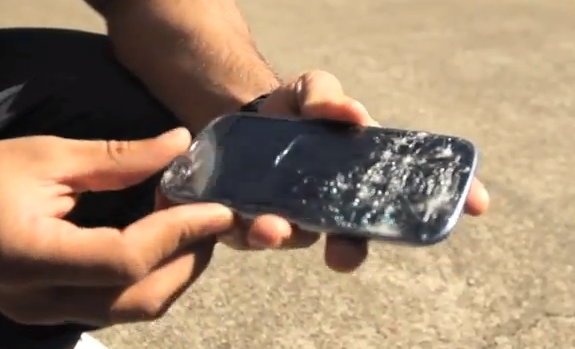 The Samsung Galaxy S4 may not be able to survive drops any better than the Galaxy S3.

We’ve already seen how the Samsung Galaxy S4 can survive knives keys and coins, but we have yet to see how the plastic design and Gorilla Glass 3 cover can withstand a fall.

Samsung skipped over a metal design like the HTC One, using a stronger lighter plastic than the Galaxy S3 for the new flagship phone. This plastic back may scuff when dropped, but unlike metal, users can purchase a replacement back for the smartphone.

Unlike the Sony Xperia Z, the Galaxy S4 is not waterproof and it will likely take time for the Samsung Galaxy S4 waterproof cases to arrive. A year after the launch of the Galaxy S3 we are still waiting for the LifeProof Galaxy S3 case to hit the market.

SquareTrade’s in house data suggests Samsung users are 20% more likely to buy insurance of some kind for their smartphone or tablet than an iPhone owner.

SquareTrade sells smartphone and tablet extended warranties which cover accidental damage. The company is currently running a special on the Samsung Galaxy S4 warranty, offering two years of accidental damage protection for $99 with a $99 deductible on any claims. This does not include loss or theft of the phone like some services provided by carriers or smartphone insurance sold by other parties.