It’s looking more and more like Samsung is planning a public hands on with the Samsung Galaxy S4 in Times Square.

Two of the banners cover billboards that previously advertised a retail storefront for rent. This is the same retail store Microsoft occupied until earlier this year, offering up prime location for a Samsung Galaxy S4 hands on experience. The windows of the retail location are still papered up, but the big advertisement for a tenant is not there. 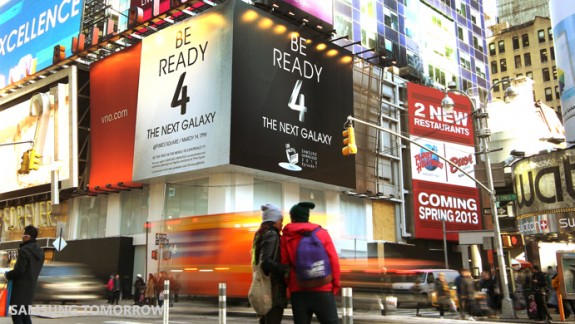 Could this be the new Samsung Experience in Times Square? If so, will Samsung allow fans to get a Samsung Galaxy S4 hands on ahead of the U.S. release date? It’s looking more and more likely.

It is a possibility that Samsung’s plans for a larger presence in the U.S. is a sign of a faster U.S. Samsung Galaxy S4 release date. Earlier rumors indicated that the Galaxy S4 release could take place as soon as April, but that it may not arrive on U.S. carriers until May or June. If U.S. Carriers insisted on a U.S. launch for the Galaxy S4 and Samsung is planning a retail location in Times Square, perhaps the Samsung Galaxy S4 will launch in the U.S. at the same time as the international launch.

The third Samsung Galaxy S4 teaser in Times Square is located on a separate building, much higher up. On Samsung Tomorrow, an official Samsung website, another clue is the invitation to “Meet The Next Galaxy @ Times Square, NY” and the hint that, “you don’t want to miss being among the first in the world to get a glimpse of The Next GALAXY.” 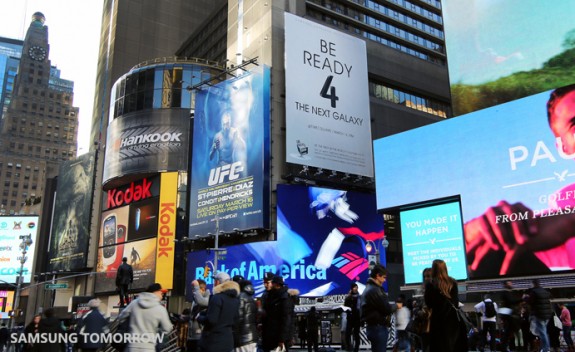 The original Galaxy S4 teaser invites users to Times Square to “experience Samsung’s new flagship smartphone at Times Square.” which sounds a lot like touching and using the Samsung Galaxy S4, not just watching a livestream while standing in Times Square.

We’ve reached out to Samsung for a comment on what users can expect at the event and to find out if they are planning on occupying a retail location where shoppers can go hands on with the Samsung Galaxy S4 ahead of the release date. Samsung did not have additional information to share at that time. 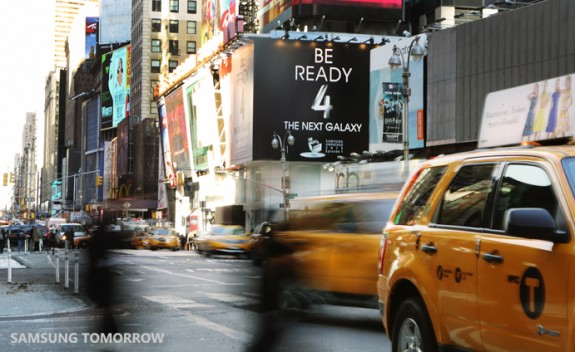 Samsung challenges users to “Be Ready” for the next Galaxy in recent Times Square ads. The “4” in the ad is linked to the Samsung Galaxy S4, which Samsung is expected to launch on March 14th.

Samsung will hold a Galaxy S4 launch event on March 14th at Radio City Music Hall in New York City, and will likely pair this with a public viewing and or “experience” in Times Square. The event starts at 7 PM, so the Times Square experience should also begin soon after.

Leaks and screenshots tell us that the Samsung Galaxy S4 will feature a 4.99-inch 1080P Full HD display and will pack a quad-core processor with 2GB of RAM. The latest leaks appear to confirm a 13MP camera. In screenshots we also see a AT&T logo, hinting at an AT&T Galaxy S4. Claimed benchmarks also show what appears to be a Verizon Galaxy S4 model.

Additionally we expect that users will be able to control the Samsung Galaxy S4 with their eyes and movements. A Smart scroll feature is rumored and shown in screenshots. This would allow users to scroll in apps without touching the screen. The sensors and front facing camera would detect eye and head movement to scroll up and down in select apps.