The Cygnett Workmate Evolution case comes in four color combinations, but we really like the orange, black and gray case they gave us to try. It stands out, so people with subdued tastes will want to go for the cases with the black, blue or lighter gray edges. 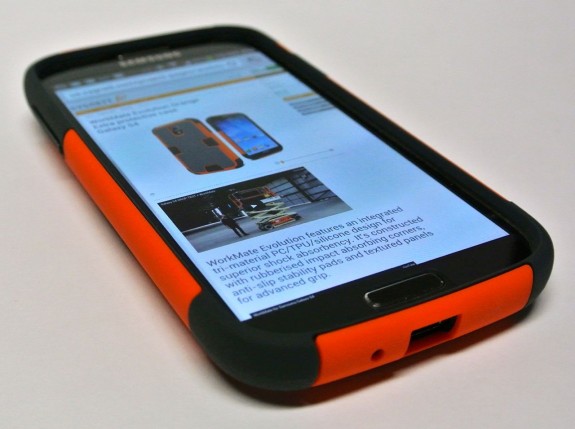 This same case withstood a drop from multiple heights in a video the company posted:

The case’s edges offer enough grip to grab hold and hang on to the phone. The rubberized back keeps it in place on a slick desk or even on the dash of a car, so long as the driver doesn’t take curves like a NASCAR driver.

The Cygnett Workmate Evolution goes on the phone easily. Insert the phone into the soft inner lining and press the edges to make it fit snug. Then pop the phone with the lining into the hard outer shell. It pops on easily, but the user does need to squeeze around the edges to make sure it’s snug.

Notice the raised lip to protect the screen

The Workmate’s raised lip around the front of the screen keeps the phone’s display from impact if the user drops their phone face down.

Place the cheep screen protection film, included with each Cygnett case, on the display and it will also protect the display from key scratches in a pocket. But the protection film also makes fingerprints show up worse than naked screens. The film installs easily, but not as easily as the Seidio Vitreo Tempered Glass protector we reviewed for iPhone 5. Seidio plans to release one for the S4 soon.

The opening around the micro-USB port is too small

While we really like the Workmate Evolution, it’s not perfect. First, the small opening around the micro-USB port keeps our car charger from fitting. We had to carve out a tiny part of the hard outer case to make it fit.

The raised button covers that shield the power button and volume buttons require users to press hard to change the volume or turn the phone on/off. It’s slightly annoying. If that’s the trade-off for this level of protection, than we’ll gladly put up with it to keep the phone protected. We just think it could be easier to press these buttons. Neither issue keeps us from recommending this otherwise great case. 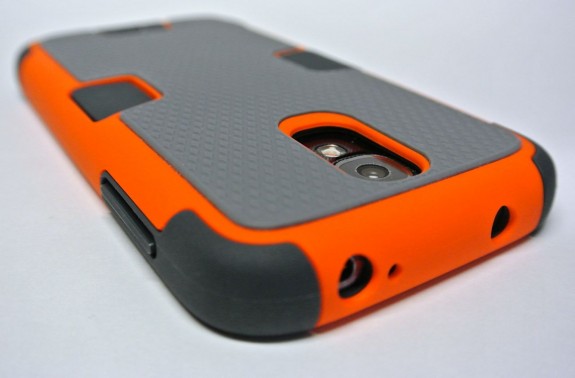 Get the orange Cygnett Workmate Evolution Orange Extra Protective case for the Samsung Galaxy S4 for only $29.99 directly from Cygnett or at Amazon.