Samsung is giving away $33,0000 dollars worth of Samsung Galaxy S4 smartphones to celebrate the launch of the new flagship device with a 5-inch 1080P HD display and a host of cool software features.

Users who can’t wait for their contract to come up for renewal can sign up for a chance at a free Samsung Galaxy S4 as part of the Cut to the Front of the Line contest on Samsung’s website.

During the next 30+ days Samsung will give away over 50 Samsung Galaxy S4 devices and several grand prizes that also include a 55-inch Samsung Smart TV. 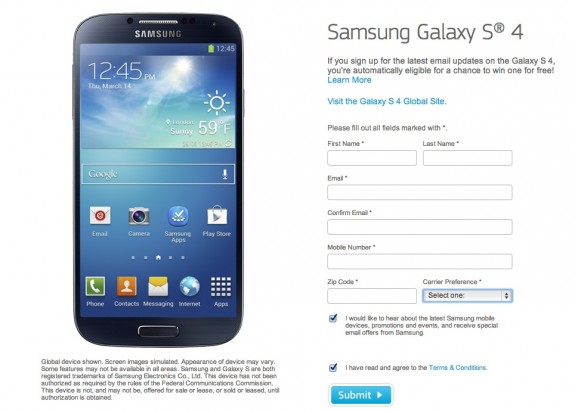 Samsung is giving away 52 Samsung Galaxy S4 devices ahead of the official U.S. release.

The best part about this contest is that users can sign up to win a Samsung Galaxy S4 simply by asking for more information about the new phone.

Samsung asks for the Galaxy S4 carrier preference during signup, so there’s a good chance winners will get a Galaxy S4 that works on their carrier. The contest is taking information on AT&T, Cricket, Sprint, T-Mobile, US Cellular and Verizon Wireless. The prize does not include any cell phone service, just the Samsung Galaxy S4, which is an approximately $650 device.

The contest runs through April 22nd, when the grand prize drawings will be announced. The winners will receive their Samsung Galaxy S4 in 10-12 weeks, which should be around the time of a U.S. Galaxy S4 release date.