In typical Android fashion the first Samsung Galaxy S4 deals appeared online this morning ahead of the official Galaxy S4 release. Walmart is offering the Samsung Galaxy S4 pre-order as predicted, but what we didn’t expect is a price cut.

Walmart Wireless is taking Samsung Galaxy S4 pre-orders for $189.99 with a two-year contract. That’s a savings of $10 over buying directly from AT&T, which isn’t much, but it is the start of the price cuts and deals shoppers expect — even on flagship Android phones. 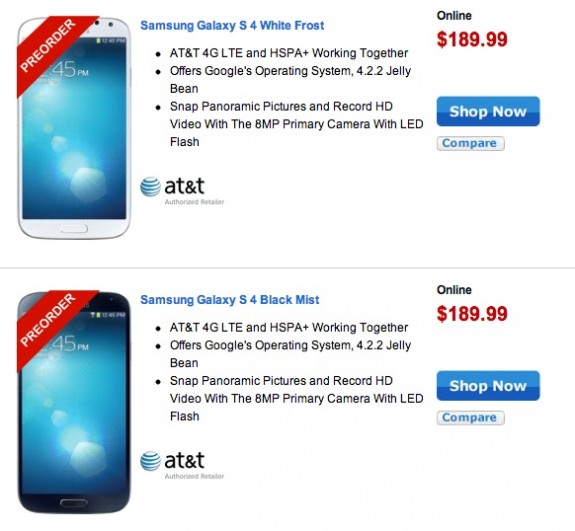 The first Samsung Galaxy S4 deals arrive ahead of release thanks to Walmart.

Shoppers can pick up the Samsung Galaxy S4 in White Frost and Black Mist on Walmart Wireless. The offer is for new and existing AT&T shoppers, and even includes secondary lines added to a new account.

This is not as big of a deal as we see on the HTC One, which is available for $50 less than retail buy purchasing at WireFly, but it is a start.

Many of the best Android smartphones are available at cheaper than carrier advertised prices from third-party services. Companies like Walmart, Radio Shack, Amazon and Wirefly typically offer these hot phones at reduced prices — sometimes with over $100 off within months of launch.

The retailers make up for their lower prices thanks to a commission on new accounts and sales. Several of these retailers also include their own early termination fee (ETF) on top of the one imposed by carriers. Wirefly for example, charges an $400 additional ETF for users who cancel a two-year plan within 181 days of purchasing a phone. For most users these types of fees won’t matter, but for those who may need to cancel a plan on short notice the savings are not worth the fees.

Despite the small price cuts today, it is possible that the Samsung Galaxy S4 will see an additional price cut when it arrives on Amazon Wireless and on Radio Shack. In the past we’ve found deals for the Samsung Galaxy Note 2 as early as a month after it launched, and within a few months saw deals dropping the price by $200 on the device.

Samsung includes a 5-inch 1080P HD display and a 13MP camera in the Samsung Galaxy S4 (even though Walmart marks this as an 8MP camera). The device includes a collection of software features, sensors and special hardware to enable touch free control, eye-tracking and the ability to use multiple apps on the screen at once.