Today Fitbit announced that all of its recent devices will now supports the Samsung Galaxy S4, making it the third Android phone that works with Fitbit activity trackers.

The Samsung Galaxy S4 joins the Galaxy S3 and the Galaxy Note 2 on the admittedly short list of Android devices that Fitbit supports. As Fitbit explains in its blog, its devices didn’t work with the Galaxy S4 when the phone first launched because the company had to make sure it had all of the software needed to support the fitness trackers. 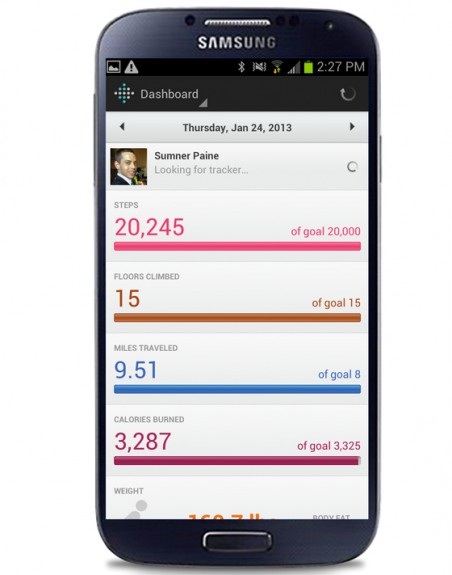 Fitbit is one of only a few companies who make fitness trackers that can sync to Android devices. Jawbone recently added Android support to the Up. Nike, however, said it has no plans for an Android FuelBand app. That won’t stop users from wishing for a FuelBand 2 with Android support, however.

Fitbit devices can work with the Samsung Galaxy S4 because the phone supports Bluetooth 4.0. Most other Android smartphones lack support for Bluetooth 4.0, which means Fitbit can’t connect to them. The next version of Android, however, will have Bluetooth Smart, which will include Bluetooth 4.0 support.

With Bluetooth Smart support Fitbit should have no problem supporting Android smartphones that run Android 4.3 or whatever Google calls the next version . In the meantime, Fitbit says it’s working with phone manufacturers and Google to make its devices work with even more Android smartphones.

On the Android front Fitbit doesn’t have to compete with Nike, but it will have to compete with Android. Samsung introduced the new S Health app with the Galaxy S4 which helps users track their activity and fitness. The app will work with a range of devices including a Fitbit Flex-like tracker, a scale like the Fitbit Aria and a heart monitor. Samsung’s accessories aren’t available yet, but they should come sometime this summer.