The Samsung Galaxy S 4 is only available in Black Mist and White Frost at this time, but by summer shoppers will be able to pick between four new colors. Samsung announced the new color variations while bragging about brisk Galaxy S4 sales in the first month since launch. 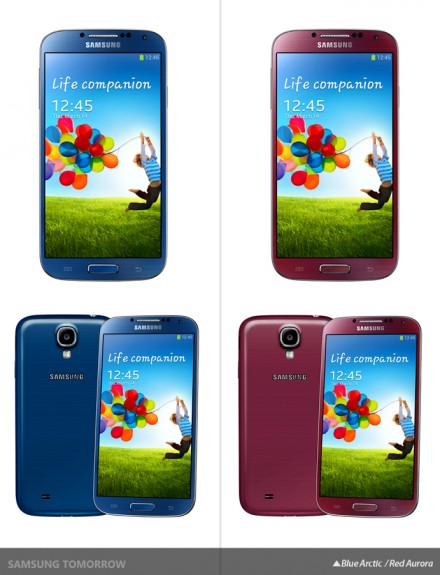 The Samsung Galaxy S4 will arrive in four new colors this summer, possible one will be part of the Galaxy S4 Nexus program.

There is no timing for the new colors, but we could see Samsung talk more about them at the rumored Samsung Galaxy S4 mini and Galaxy S4 Active launch event which is possible later this month or in June.

Samsung is known for bringing many new colors to the Galaxy S and Galaxy Note lines, though the company often pushes out these new colors in markets outside of the U.S. Sprint recently scored a purple Galaxy S3, right as the Galaxy S4 launched, so it’s clear the company is pushing up new color variants.

Given the early rollout of the new colors there is a chance we will see a few of these new Samsung Galaxy S4 colors arrive on carriers in the U.S. like Sprint, AT&T, Verizon and T-Mobile.

Google is set to release a Galaxy S4 Nexus version this summer in the U.S. only. This version of the Galaxy S4 will feature the same hardware, but the phone will run stock Android and be first in line for new software updates. Google showed off the white Galaxy S4 Nexus edition on stage at Google I/O, but it is possible the company will get one of the new Galaxy S4 colors to differentiate the phone further. The Galaxy S4 nexus arrives in late June, which fits a summer reveal of a new color.