The Samsung Galaxy S4 is the latest Samsung smartphone, arriving on the market with a 5-inch 1080P HD display, plastic construction, a quad-core processor and a collection of new software features.

After months of anticipation Samsung took the covers off of the Galaxy S4, the latest Android smartphone which the company hopes will compete with the iPhone 5, HTC One and upcoming devices like the iPhone 5S.

The Samsung Galaxy S4 looks much like the leaked device which appeared in a number of photos and videos. 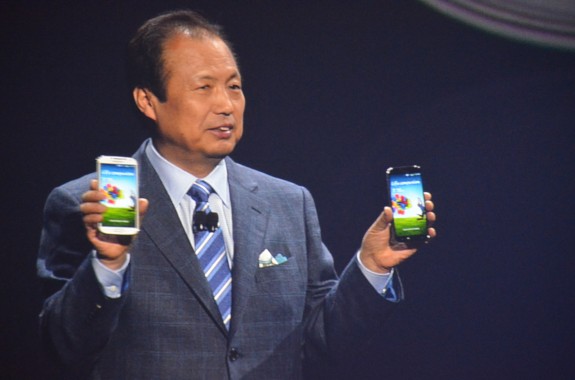 The Samsung Galaxy S4 features a 5-inch display with a full 1080P HD resolution, like that found on the HDTV in most living rooms. This translates into a screen with a 441 pixel-per inch display. that promises to deliver a crisp viewing experience. The display is actually a 4.99-inch Super AMOLED display. The display includes Adapt Display, a feature that allows the display to automatically adapt to the light and location, to deliver the best looking experience.

Users can also use the Samsung Galaxy S4 display with gloves on, a feature we saw on the Nokia Lumia 920 last year. This is something not found ont eh iPhone 5.

Samsung includes eight sensors, including Infrared gestures and Temperature and Humidity sensors. The Samsung Galaxy S4 features a IR control which will allow users to control their HDTV and home theater with the device. 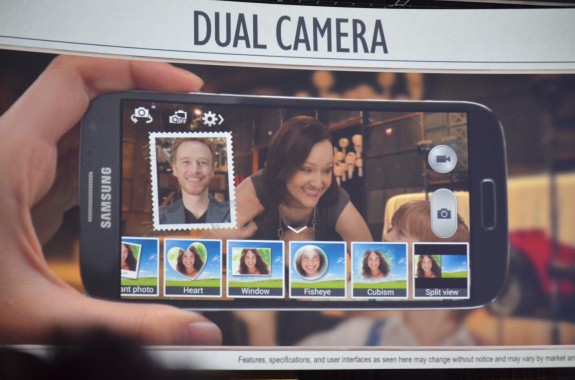 The Samsung Galaxy S4 features a 2600 mAh battery that is removable, so users can make it through a full day of use, even with all of the sensors and activity under the hood.

The Samsung Galaxy S4 also features a 13MP camera with a new dual camera feature that lets a user take photos and videos while they are also in the photo or video. Users can turn the dual camera mode on and off while recording. When playing back, the video will switch between the modes. There is also an option to add sound to the Samsung Galaxy S4 photos, with sound before or after a photo.

The Samsung Galaxy S4 supports touchless control with Air View. Users can hover their finger over the display to see a preview of an image in a gallery without actually touching the display. This is similar to the Galaxy Note 2, but there is no need for an S Pen. 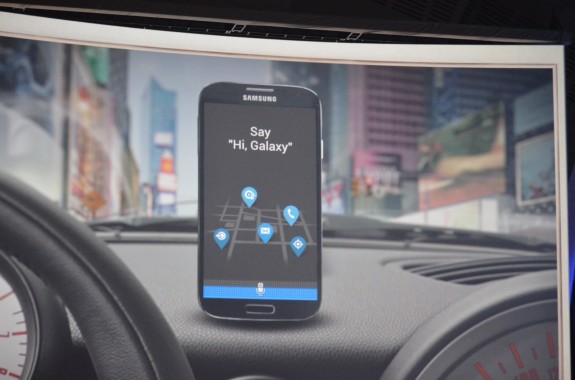 Samsung also announced the S Voice Drive, a simplified version of S Voice that is designed to handle the simple needs of users who are driving. The S Voice Drive app includes built in navigation, take calls, allow users to text with their voice and perform voice searches. The feature allows a user to say , “Read out” and the Samsung Galaxy S4 will read off a text message.

The Samsung Galaxy S4 is the first Knox device, which is built n top of a security enhanced version of Android that separates the phone into a personal space and a work space. It’s like carrying a business phone and a work phone, without the need to actually carry two phones.

When you meet up with five to eight friends who all also have Samsung Galaxy S4 devices, the phones can act as wireless speakers, without the need for WiFi. Samsung claims this will allow users to even set up a 5.1 system. Users can adjust the volume of each device, and Group Play supports multiplayer games. The new Group Play feature allows users to also share photos.

The Samsung Galaxy S4 ChatON supports dual video calls, allowing multiple users to use the front and rear facing cameras at the same time. ChatON also lets users share their screen, something IT managers will love.

Samsung also includes Air Call accept, a method of accepting a call by waiving your hand over the screen. The Galaxy S4 also allows users to quickly scroll on a page by titling the screen.

Samsung is making it easy for iPhone users to switch to the device with a new Samsung switch tool that helps users move from another phone to the Galaxy S4.