The Samsung Galaxy S4 release date could land in April, according to two new rumors, marking the second time we’ve heard rumors of an April release for the flagship Samsung smartphone.

It looks like Samsung will announce the Galaxy S4 at an event in March, and now two separate sources share rumors of an April Galaxy S4 release.

It looks like the Galaxy S4 release date will land in April for International and unlocked models, but there are no rumors yet for the U.S. Galaxy S4 release, which may lag behind by weeks or months.

Geeky Gadgets says the Galaxy S4 release date in the UK is set for April 15th to the 22nd, according to a, “source close to a major UK retailer.” Geeky Gadgets claims the source was able to deliver the exact launch dates for the iPad mini and iPhone 5.

The timing of this Uk release window matches up with the earlier report that the Galaxy S4 release would take place on the week of April 15th through the 22nd.

According to PocketNow, a New Zealand mobile retailer is running a sales competition for employees, which promises a Galaxy S4 for all winners. The contest runs from February 4th to April 8th, which leads PocketNow to conclude that a release is coming in April. 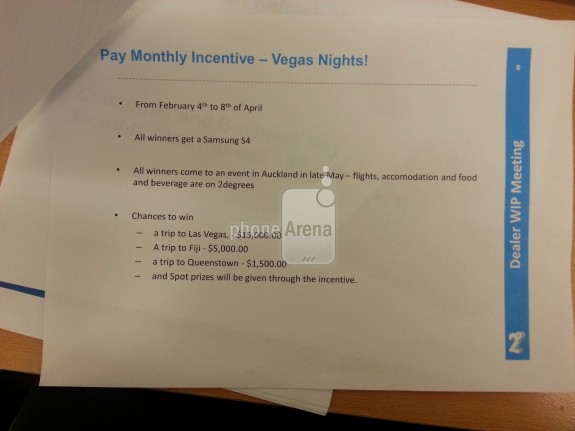 Rumors of a Galaxy S4 release in April.

The contest appears to be for 2Degrees, a New Zealand prepaid carrier. 2Degrees currently sells the GalaxY S3 and Galaxy Note 2, which is a good sign that the company will also carry the Galaxy S4.

The Galaxy S4 is rumored to use a 4.99-inch 1080P display, pack a 13MP camera and a 2600mAh battery with support wireless charging thanks to an optional kit. There are also rumors that the Galaxy S4 will bring S-Pen support and an enhanced Nature UX software skin on top of Android 4.2. Expect a quad-core processor, which may be the newest Exynos Octa 5 processor.

The only rumor of U.S. Galaxy S4 models so far is a string of code on SamsungMobile which points at an AT&T Galaxy S4 model, but we expect to see the Galaxy S4 on Verizon, Sprint and T-Mobile close to the official U.S. release.