Samsung could use the Samsung Galaxy S4 release to launch a new Samsung update tool that may restrict the sales of Samsung devices outside the country of origin, causing delays for consumers and higher prices and the ability to restrict updates.

The Galaxy S4 is rumored to launch in March at a special Samsung event taking place in the U.S. and multiple rumors put the Galaxy S4 release date in the middle of April, but it’s not clear what countries will see the Galaxy S4 during the first release.

The new Samsung software service, reported by SamMobile, would allow Samsung to better track the sales of the Galaxy S4 and future Samsung devices, and give the company more control over the Galaxy S4 updates. This rumored update is said to work with Kies and OTA updates, not replace them. 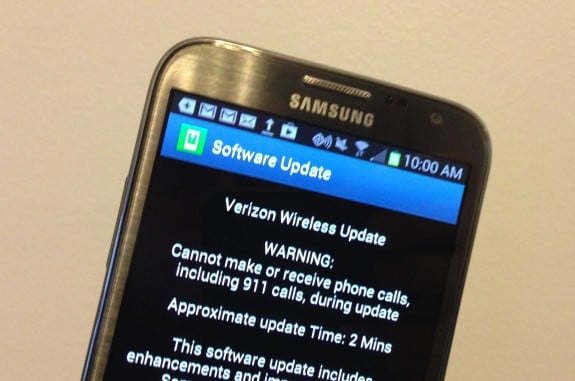 Rumors point to the Galaxy S4 launching with a new update service.

Details on the new Samsung update method are murky, but SamMobile reports that this update tool would allow Samsung to stop retailers from selling a phone made for France to a customer in the Netherlands. It is not clear if this would also stop retailers like Negri Electronics and Clove from selling international devices to U.S. customers looking for an unlocked Galaxy S4 before the official U.S. release date.

The rumors suggest that this new software service will allow Samsung more control of updates, and faster updates. While this may be true for international versions, it is not clear how this system would impact the Galaxy S4 sold on U.S. carriers, which typically hold up the upgrade process. For example the Verizon Samsung Galaxy Nexus is still waiting for the Android 4.2 Jelly Bean update.

The Samsung Galaxy S4 is the name given to Samsung’s upcoming flagship phone which will likely carry the Samsung GT-9500 model on international versions. A small string of code on SamsungMobile.com suggests the AT&T Galaxy S4 will carry the SGH I337 model number. No Sprint, T-Mobile or Verizon Galaxy S4 rumors have surfaced, but Gotta Be Mobile expects to see the Galaxy S4 release timed across all major u.S. carriers soon after the international release.

Rumors suggest the Galaxy S4 will use a 4.99-inch 1080P HD display and a quad-core processor. Rumors point to the new Exynos Octa 5 processor and 2GB of RAM, but this is unconfirmed. Leaks point to a 13MP rear facing camera and a 2600 mAh battery with a wireless charging option.

Stay tuned for the latest on the Samsung Galaxy S4.