Samsung Galaxy S4 Release Rumored for May or June in U.S.

Leaks pointed to a Samsung Galaxy S4 launch event on March 22nd, but a new report from SamMobile claims Samsung will hold an Unpacked event on March 15th to launch the Galaxy S4.

It’s not clear where the Samsung Galaxy S4 launch will take place, but New York City is a likely location in the U.S. Samsung is expected to send invitations to the Galaxy S4 launch event shortly after Mobile World Congress, which runs from February 25th to the 28th in Barcelona Spain. Samsung will be at MWC 2013, but is reportedly not planning to launch the Galaxy S4 there. 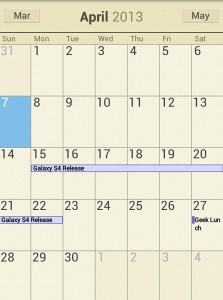 The U.S. Galaxy S4 Release is rumored for May or June.

The U.S. Galaxy S4 release is rumored for May or June, alongside releases in Australia and Africa. No U.S. Carriers are confirmed for the Galaxy S4, but rumors point to an AT&T Galaxy S4 model, and it is likely that we will also see T-Mobile, Sprint and Verizon Galaxy S4 releases in this time frame. All of these carriers sell the Galaxy S3, and started sales shortly after the international release.

The Galaxy S3 was first released in late May internationally, and arrived in the U.S. a month later in late June, with availability on the major U.S. carriers by July 2012.

If Samsung can deliver the Wireless Charging Kit at launch it would mark a change from the Galaxy S3, which is still missing an official wireless charging kit. There is no mention of a Smart Dock, like the one for the Galaxy Note 2, which turns the device into a small computer with multiple USB ports and an HDMI out. Also missing from the rumored Galaxy S4 accessories is an extended battery.

Read: Should I Buy the iPhone 5 or Wait for the Galaxy S4?

The Galaxy S4 remains a mystery, but a better picture of the Galaxy S4 is coming together thanks to rumors and leaks. The Samsung Galaxy S4 is expected in two colors, black and white,  but little is known about what the device looks like. This isn’t stopping various renders from showing what the Galaxy S4 could look like based on past Galaxy smartphones.

The Galaxy S4 will almost certainly use a 4.99-inch Full HD 1080P display with a pixel density of 441 ppi. Samsung is reportedly manufacturing this display for an early March Galaxy S4 launch.

The Galaxy S4 is expected to use a quad-core processor, support 4G LTE in the U.S. and feature a 13MP rear facing camera. A 2600 mAh battery is rumored, as is the wireless charging kit which could arrive at launch.