Samsung enhanced the security of the Galaxy S4 with a partnership with Absolute, a company well-known for making notebook security software, and the feature is rolling out with the Galaxy S4 as part of Samsung KNOX.

Compared to Apple’s Find My iPhone feature, the Galaxy S4 will offer a more robust tracking solution. Thieves can restore the iPhone to disable Find My iPhone, but Absolute’s firmware-persistence technology on the Samsung Galaxy S4 lives at a firmware level, which means a hard reset will not cancel a user’s ability to track or remotely wipe the Galaxy S4.

With the same technology used in Computrace LoJack for Laptops, Galaxy users can track, manage and secure their device. This solution is aimed at business and enterprise users. The details for personal users are still shaping up, but Absolute will be built into the Samsung Galaxy S4 firmware as part of Samsung KNOX on all devices.

Just as with Absolute’s notebook services, if a device is stolen, Absolute can work with local law enforcement to facilitate a recovery. 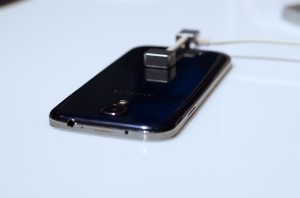 The new security measures come as Samsung hopes to gain a larger share of business users and enterprise customers. The technology will roll out with the Galaxy S4 and will, “be embedded in flagship Samsung devices” including tablet devices later this year, according to Absolute.

We’ve heard that Samsung KNOX would deliver enhanced security features to the Galaxy Note 2 and Galaxy S3, but Note users will likely need to wait for the Galaxy Note 3 to get a similar experience.

Samsung spent over 4 billion in advertising last year, and likely plans to spend even more in 2013 to push the Samsung Galaxy S4 to enterprise users through commercials like the Samsung Tim Burton ad and the Unicorn Apocalypse office videos, like those shown below.

The Samsung Galaxy S4 release is set for early May in the U.S. with AT&T Galaxy S4 pre-orders starting on April 16th. The Verizon Galaxy S4 passed through the FCC last week and T-Mobile plans to sell the Galaxy S4 on May 1st.

As Samsung plans to compete with the HTC One, iPhone 5 and the rumored iPhone 5S, security features like this could help the company make inroads to large business purchases.