Samsung Galaxy S4 Updates Roll out on Verizon and AT&T

Users of the Samsung Galaxy S4 on the nation’s two largest mobile carriers, AT&T and Verizon, will now be able to move applications to microSD cards and secure their device using the Samsung Knox suite of applications.

That’s huge since the Samsung Galaxy S4 with 32GB of storage is only available on AT&T. Because of this, most users are getting by with just the 16GB version of the Galaxy S4. Of that 16GB, only around 9GB is not being used by the operating system. 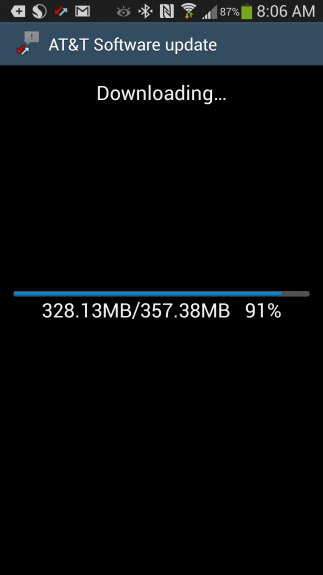 A screenshot of the download of the latest Galaxy S4 update.

Though it isn’t as high-profile as being able to install applications to get local storage back, the update’s KNOX security suite will allow users to section off  their work and home smartphone usage. Instead of having all of their information together, businesses could use the suite to safeguard their sensitive information, without affecting the personal information that’s stored on the device.

As more users opt to bring the latest consumer devices like the iPhone and Galaxy S4 into the business environment, the need to safeguard company secrets on mobile devices will continue to increase.

The United States Department of Defense recently approved the KNOX Security Suite for use on its information networks.

This update will also include a newly see-through status bar and an HDR video option. HDR allows users to take pictures with high-degrees of color contrast. Samsung began rolling out this update to some user’s through its Kies desktop client last month. That’s according to AndroidCommunity.

AT&T users will be prompted to update their device over-the-air without the need to plug into a computer. As the download is 350 MB, it’s probably a good idea to connect to a Wi-Fi network before doing so though.

For now, users looking to update their Galaxy S4 on Verizon will have to do so using the carrier’s desktop application. Users will need to have their computer and a microUSB cable handy according to Verizon’s step-by-step guide.