A trio of alleged Samsung Galaxy S4 videos arrived this morning, showing off touch free control of the Samsung Galaxy S4 and a smart pause feature that automatically pauses a movie when the user looks away. We also get a look at what may be the new Galaxy S4 lock screen.

These new videos come from Chinese site, IT168, the same site that leaked 19 high quality photos that appear to show what the Samsung Galaxy S4 will look like. The leaks line up with Samsung’s Galaxy S4 unveiling which takes place in New York City tonight.

The alleged Samsung Galaxy S4 videos show off the new smart software features rumored for the Galaxy S4. With this much evidence mounting on the day of the launch, it is very likely that this is the Samsung  Galaxy S4 and these features will show up on stage tonight. 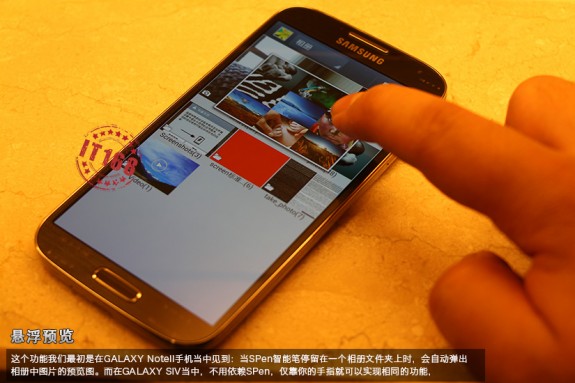 Possible demo of Air View on the Samsung Galaxy S4 without an S Pen.

In a one minute demo video, we can see a user using the touch free display that is rumored for the Galaxy S4. The video shows an individual activating Air View, a preview like feature found on the Galaxy Note 2, by hovering his finger over the screen. The camera zooms in close enough to show this in action, and prove that the user is not touching the display.

The touch free control demo shows off a user viewing a larger image in the gallery and previewing a message in the built-in messages app.

We’ve seen similar features on the Samsung Galaxy Note 2, but the device required a special S Pen to make the magic happen. The Samsung Galaxy S4 appears to use new screen technology that allows users to control the smartphone without touching it, without the need for a special stylus.

It’s not immediately clear if the Galaxy S4 is able to use this technology in all video apps, like Netflix, Google Play or HBO Go.

In a third video, we also see the new Samsung Galaxy S4 lock screen. This video isn’t as exciting as the others, but it offers another look at this device in action.

Samsung is preparing to launch the Samsung Galaxy S4 at a major event in New York City this evening. The company is normally known for secrecy of upcoming devices, so there is always a chance that this device is not the real Galaxy S4, but a test unit that is not using a final design.

Rumors point to a Samsung Galaxy S4 with a 5-inch display and a quad-core Qualcomm Snapdragon 600 processor in the U.S.