Samsung made a big deal about using the Samsung Galaxy S4 as a wallet and as a digital companion for tickets and coupons at the launch event.

Samsung’s ace in the pocket is the ability for Galaxy S4 users to use their coupons, tickets, loyalty cards and more in places where retailers have not upgraded to advanced 2D scanners.

While some competing phones will not scan at every retailer due to glossy, backlit displays, the Galaxy S4 features technology from Mobeam. 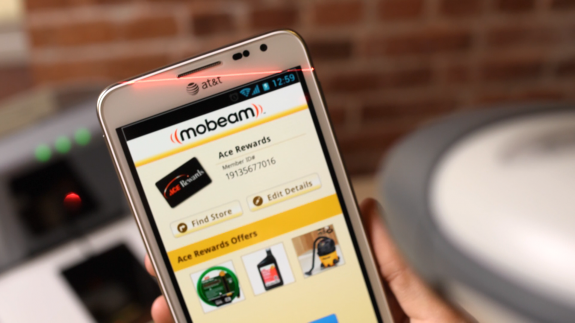 The Samsung Galaxy S4 features Mobeam technology that lets it work with barcode readers at almost any retailer or venue.

Mobeam uses the Galaxy S4 proximity sensor to send out a pulse of light that mimics a barcode. By using this technology to push a barcode, or barcodes, to a scanner the Galaxy S4 can work in more retailers, concert venues and other places with scanners.

This technology from Mobeam allows the Galaxy S4 owners to use the device in the more locations without worrying about whether or not a barcode reader will work. The video below shows the Mobeam technology in action.

One advantage this could give Samsung over Apple is that the Galaxy S4 Wallet should allow users to carry tickets and coupons that will work in more places. While we don’t yet have any details about a partnership with Major League Baseball, the Galaxy S4 should be able to work in any stadium with a standard barcode scanner, not just those which have been updated to work with Passbook on the iPhone.

Mobeam is already partnered with Procter & Gamble for a mobile coupon effort we expect will kick off in the coming months. The company could not comment on the actual implementation of the barcode technology, save to say that it is available within apps

As for activating the transmission to the barcode, Mobeam says the Galaxy S4 could start beaming when it detects a scanner, when it detects a motion of moving the phone around towards a scanner or with a tap. The implementation may be different depending on the app.

According to industry estimates, there are 165 million red laser scanners throughout the world, which leaves a big market open for Mobeam and the Galaxy S4.