With an official release date likely coming earlier than previous years, rumors and talk surrounding the Samsung Galaxy S5 have been flooding in. From fans making their own render of what a curved Galaxy S5 could look like, to leaked specs and more.

2014 is fast approaching and the latest reports and rumors have all speculated that Samsung will be aiming for a late February or early March release next year for its new flagship smartphone. Opting to deliver it quicker than previous years to beat the competition by another month or two, not to mention highlight its new YOUM curved smartphone display technology. While we’re not sure that a curved screen is in the GS5 plan, more details have arrived today that point to that not being the case. 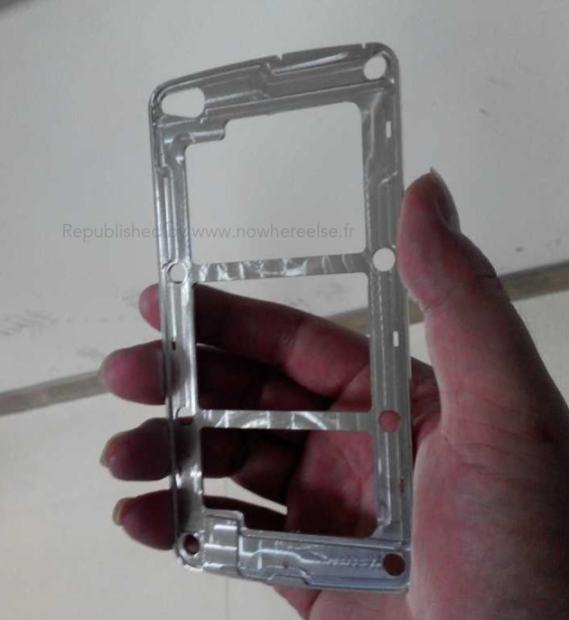 Samsung’s received a lot of flack for the use of cheap (yet lightweight) plastic in the design of its smartphones, and many believe the Galaxy S5 may finally be the device and year they change things up and drop an aluminum smartphone. In order to compete with the iPhone 5s and HTC One this may make sense, but Samsung’s stuck behind its design time and time again with the Galaxy S3, Note 2, Galaxy S4, and lately the Note 3. We don’t see this changing, but some new images show a metal frame the device could house.

According to some new details and images shown above found by the site Nowhereelse, Samsung has a metallic internal shell that will be the base of the Galaxy S5. We’ve seen this before and it’s nothing new, but could show some key details for the upcoming Galaxy S5 smartphone. For one, this could just be the internals, with the majority of the overall design and outer shell sticking to plastic, removable backs and battery, and a design we’ve seen before. At the same time, you’ll notice the camera and flash setup moved to the top corner, similar to the iPhone, so we’re not entirely sold on these images.

Then, the other important fact here being a curved display. If this indeed is the skeleton for the Galaxy S5 we don’t see any curves here. Meaning either the GS5 won’t have a curved or flexible display using Samsung’s cutting edge tech, or this isn’t actually a part from the upcoming Galaxy S5. Many reports suggest the curved smartphone tech will slowly be introduced to the market, rather than pushed out with Samsung’s main flagship smartphone.

In the end this leak reportedly comes from a Samsung subcontractor, so we’ll take the few details provided with a grain of salt. If the report is accurate however, the new Galaxy S5 could be 5.2-inches with this chassis being a few millimeters taller and wider than the current Galaxy S4.

For now we’ve heard talks of an impressive 16 megapixel camera, 64-bit quad-core processors, and many other little details, but until we see more leaks confirming these reports everything is still up in the air.