The Samsung Galaxy S5 rumors are flowing faster as Samsung pushes forward towards the Unpacked event later this month and a release that is soon to follow.

This news comes shortly after Galaxy S5 color options leaked and details continue to show a possibility of multiple models or screen resolutions for the new smartphone.

A new Samsung Galaxy S5 rumor from Sonny Dickson shows what may be the dimensions for the Galaxy S5. Dickson is normally known for sharing information about the iPhone line.

If the Galaxy S5 rumors are true, they point to a Galaxy S5 that offers a new look and a larger screen, but one that is not much larger than the Samsung Galaxy S4 sold on store shelves today.

These rumored dimensions would keep it close to the Galaxy S4 in size, though the thicker body would be almost as thick as a Galaxy Note 3 which is presumably thicker to make room for a usable S Pen stylus. Last year Samsung delivered a Galaxy S4 that was slightly wider than the Galaxy S3, but just as tall despite a larger screen. 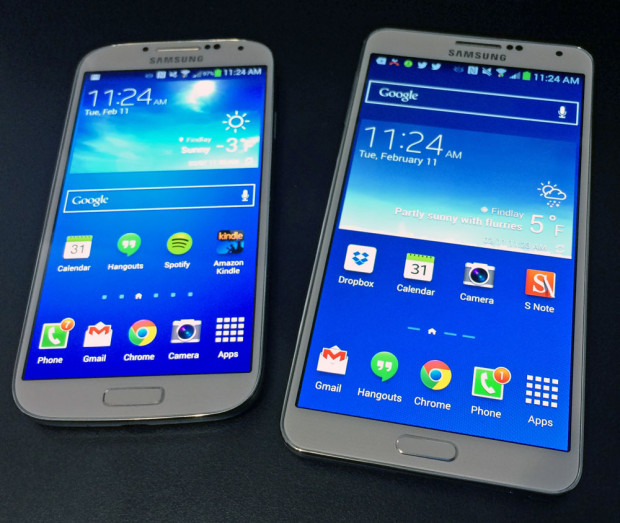 Even though the Galaxy S5 announcement is less than two weeks away this Galaxy S5 rumor does not likely come from Samsung, but from a third-party making cases. We’ve seen the result of early Galaxy S cases last year with comically large cases that shipped before the release.

Many times case makers rely on insiders and leaks to get an idea of what to prepare for. In the video above, we see what happens when this doesn’t work. Other times manufacturers are able to accurately leak the dimensions for a new phone months ahead of the announcement and release. During the summer of 2013 a case maker shared accurate iPhone 5c dimensions well ahead of the public release.

The leaked Galaxy S5 dimensions and case model show a design similar to the Galaxy S4, with a spot for a larger flash, an opening for an IR port on the top of the device and similar volume button placement. The camera appears to bump out more than on the Galaxy S4 as well.

It is possible that this is a look at the Samsung Galaxy S5 design, but it is possible that Samsung will change the home button design to accommodate the rumored fingerprint sensor and due to a push from Google to switch to on-screen buttons. The part of this Galaxy S5 that draws the most skepticism is that it looks very much like the Galaxy S4, which was a problem when Samsung announced the Galaxy S4 last year.

Samsung Executive Lee Young Hee told BloomBerg in January, “When we moved to S4 from S3, it’s partly true that consumers couldn’t really feel much difference between the two products from the physical perspective, so the market reaction wasn’t as big,” adding, “For the S5, we will go back to the basics. Mostly, it’s about the display and the feel of the cover.”

While this does not signify a complete redesign it is a quote from a Samsung executive showing the company learned from releasing what appeared to consumers as an incremental upgrade.

The Samsung Unpacked 5 event is scheduled for Monday February 24th in Barcelona where we expect to see the Samsung Galaxy S5, accessories and some wearable device announced. The Galaxy S5 release won’t likely appear for another month or so with rumors suggesting an April or May Galaxy S5 release date.

Reliable sources expect to see a Galaxy S5 with a 5.25-inch display and possibly a 2560 x 1440 resolution as well as a 16MP camera. We expect to see Android 4.4 with a new version of TouchWiz and updated apps. Check out the latest rumors to get caught up on what to expect.