The Galaxy S4 Zoom was an odd combination of the latest smartphone from Samsung, only they made it a bit thicker and added a 16 megapixel lens and hump on the back for those who’d rather not carry both a phone and camera, but wanted better photos than your average smartphone.

Just like previous years, we’ve seen countless leaks that a new Galaxy S5 Zoom is in the works. The name will likely be the Samsung Galaxy K instead, and today it leaked ahead of the April 29th announcement that’s scheduled for next week. 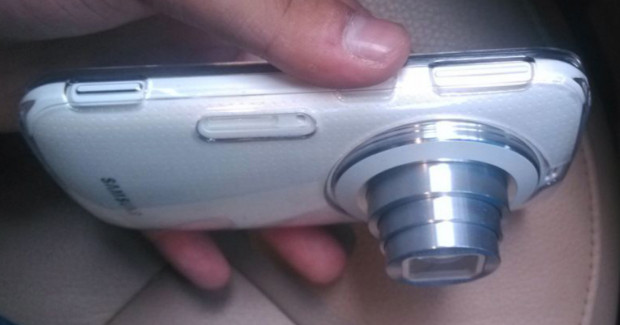 Samsung is hosting a “Kapture the Moment” event in Singapore on April 29th, and many believe that will be for a brand new camera smartphone, rumored as the Galaxy S5 Zoom. Rather than use the same name as the flagship smartphone announced in February, this new device will simply be the first of the new Samsung Galaxy K lineup. Presumably K for “Kamera” in the name.

With the announcement of the Galaxy K closing in, more details are starting to arrive regarding what costumers will be able to look forward to from Samsung. We’ve seen the device before in a leak earlier this month, showing a pretty impressive and sleek smartphone with a massive 20 megapixel camera on the rear, and today a few more photos surfaced.

Spotted by PhoneArena are the photos above and below of the new Samsung Galaxy K (aka Galaxy S5 Zoom) and along with it comes some confirmations regarding the specs we can expect to be announced live on stage later this month. 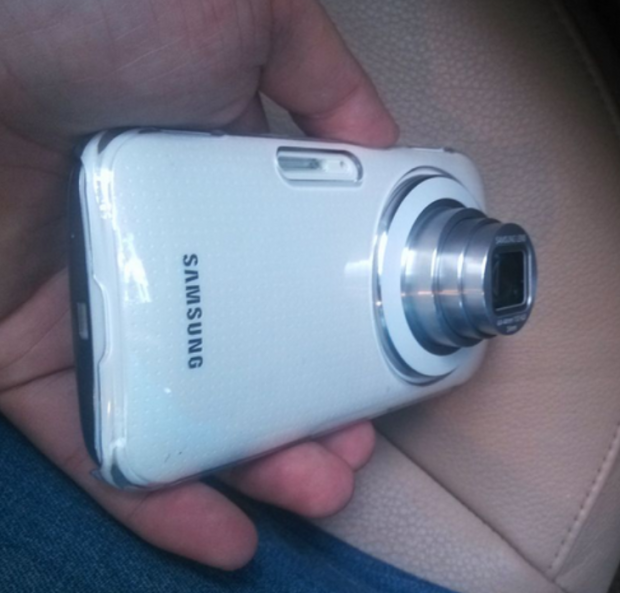 The idea here being Samsung wants to create a smartphone that can truly double as a camera, and have no compromise. They offered something similar in the Galaxy S4 Zoom, but the device was still too large to comfortable put in a pocket or use as a daily device. It was simply still too big to be a portable mobile device.

The all new Samsung Galaxy K though, looks much different. We’re hearing from various sources that Samsung’s managed to pack a 20 megapixel camera, with the same 10x optical zoom, all into a new device that’s much thinner than anything released thus far. Offering a top-tier camera experience in a rather sleek device, with specs that can compete with many smartphones available today.

So if you’re a Samsung fan or photography enthusiast and want to know what the upcoming Samsung Galaxy K cameraphone has to offer, here’s what we’ve heard so far.

The Samsung Galaxy K (Galaxy S5 Zoom) will come with a 4.8-inch 1080p full HD display, run the latest Android 4.4.2 KitKat, and be powered by a unique Exynos 6-core processor with 2GB of RAM designed by Samsung. Instead of a quad-core phone, this will have six cores to help with all the enhanced camera features and 4k video recording, and be a blazing fast and fluid smartphone at the same time.

This smartphone will be similar to the Galaxy S4 in size, but have the same textured design as the Galaxy S5 from the photos we’ve received today. Then of course it will be slightly thicker in order to accommodate the most important part, which is the camera lens. While getting smaller than last year, Samsung’s managed to increase the camera to 20 megapixels, and keep the same 10x optical zoom that made the device so impressive.

The physical design seems to match previous leaks, but we won’t know for sure until Samsung confirms this device on stage come April 29th at their event. While we could see something different debut, this is most likely what’s in store.

For now all we have is rumors and speculation to go off of, but based on releases in previous years, it’s likely a new camera smartphone option will be arriving sometime in May. The Galaxy S4 Zoom eventually arrived on AT&T with 4G LTE in the United States, and we could see a similar situation and release with the new Samsung Galaxy K shown here today.

Samsung’s also been releasing some popular Galaxy Camera devices as of late, that don’t have phone features, but with some of the same specs and camera enhancements all debuting in this rumored Galaxy S5 Zoom, we may not see a Samsung Galaxy Camera 3 in 2014.