With the Samsung Galaxy S5 official and carriers preparing a global release, most of the attention has already turned to what’s next from the popular Android manufacturer.

Following previous releases many consumers are expecting a Samsung Galaxy S5 Zoom cameraphone, and today we have our first look of exactly that. After a few rumors suggested one was coming soon, today a purported photo of the new camera/smartphone combo leaked, and it looks to be the best version yet. 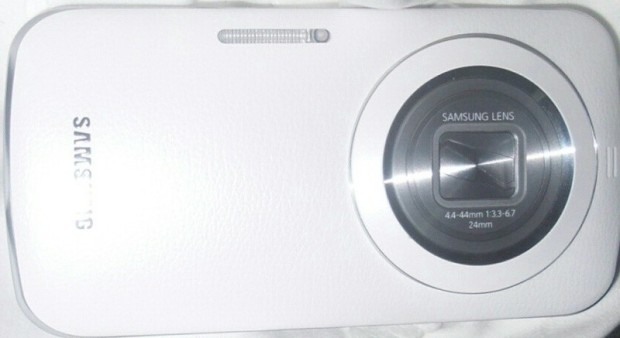 Samsung aims to fully replace your dedicated camera with the Galaxy S5 Zoom, and have finally removed the large bulge that made previous models too big for your pocket. Previous devices like the Galaxy S4 Zoom had a physical shape of a camera with a dedicated bulge for the 16 megapixel lens, and zoom, not to mention a rounded edge for that familiar camera grip. However, those are both gone in what we’re seeing above.

If the photo is indeed real, Samsung may have something consumers will truly be interested in. Offering the latest version of Android and an impressive camera all built into a powerful top-tier smartphone. While the specs won’t be as impressive as the Galaxy S5 flagship, here’s what we know so far.

According to the leakster the Galaxy S5 Zoom will have a 20 megapixel camera with 10x optical zoom, and previous rumors suggest a 4.8-inch 720 or 1080p HD display. The device will be powered by Samsung’s own 6-core processor to keep Android and the camera software running at optimal speeds, and even support NFC. This will run Android 4.4 KitKat.

While the photo doesn’t show how slim it actually is, you can clearly see the handle and camera bulge are both missing, making this instantly something easier to manage and carry. If Samsung can offer nearly everything available in the Galaxy S5 but with a 20 megapixel camera in a thin package, this could finally replace many consumers point and shoot cameras completely.