The Samsung Galaxy S5 is a successor to the Galaxy S4 with new features and a new design. It arrives on store shelves in April.

The Galaxy S5 runs a new version of Android with Samsung’s software on top to enable health tracking, pulse tracking and connectivity to Samsung’s wearable devices like the Gear Fit. 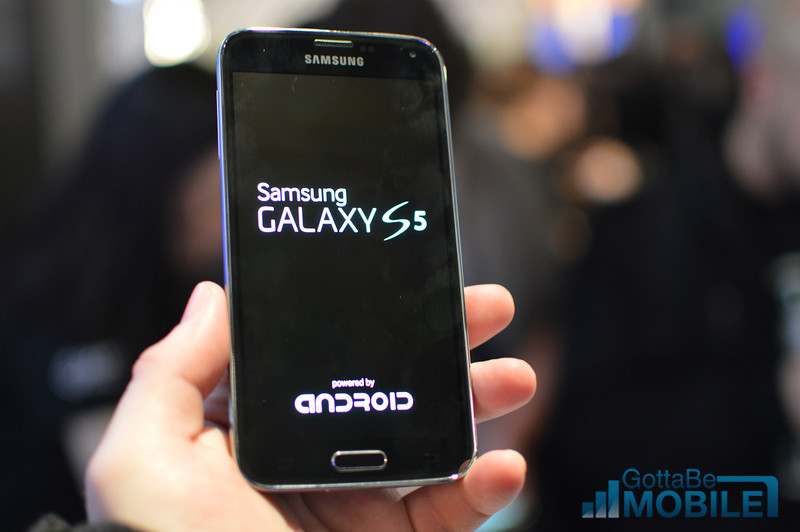 The Samsung Galaxy S5 is a new Galaxy smartphone for 2014 with many new features not found on the Galaxy S4 or Note 3.

Samsung Galaxy S5 pre-orders are expected in March and a release is planned for April. Here is a look at the most important Galaxy S5 details.

We expect to see smaller carriers add the Galaxy S5 in the future as well as pre-paid options, but for now Samsung is focused on big name carriers.

The Samsung Galaxy S5 carriers are confirmed for the U.S. and the Galaxy S5 price is easy to estimate.

There is no official Samsung Galaxy S5 price, but several contests reveal that the off contract price is below $700, with more specific options pointing to a $620 to $650 price. On a two year contract that means the 16GB Samsung Galaxy S5 price should be around $199. Like many Android phones there will likely be several Galaxy S5 deals available near the release to help consumers save.

Samsung is settling in to a sweet spot with displays, offering the Galaxy S5 with a 5.1-inch display. This is a small jump from the 5-inch display on the Galaxy S4, and even though the phone is taller it should offer similar usability. 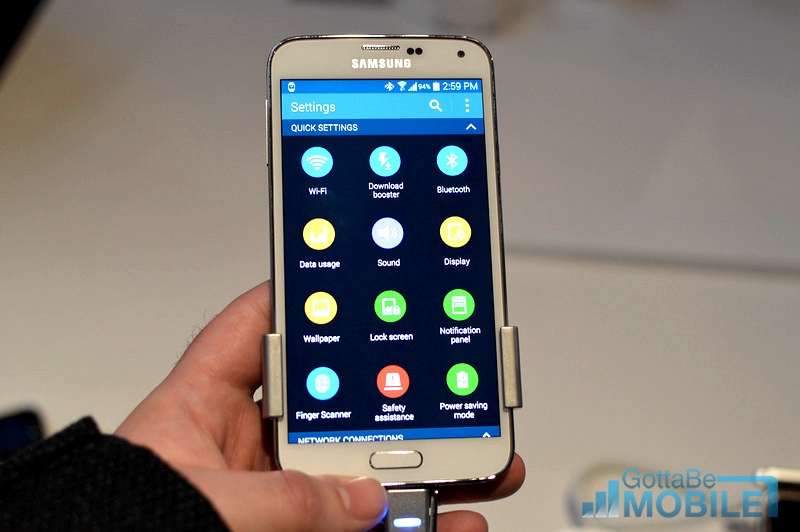 The Galaxy S5 display uses a 1920 x 1080 resolution that shoppers may know as 1080P. This is the resolution used for HDTVs and for HD movies, which makes it well suited for a smartphone that owners plan to use to watch media on.

In addition to the size and resolution there are some features that will help users use the Galaxy S5 in more places and for longer periods. The Galaxy S5 display can increase the contrast dramatically in the sun to let users read and see what is on the screen even in bright light. There is also a Super Dim mode that makes it easier on the eyes when used in the dark. An Ultra Power Saver mode turns the screen black and white and disables some functions to keep the battery going longer.

Samsung mixes the Galaxy S4 and Galaxy Note 3 design together to deliver a slightly larger and thicker Galaxy S5 for 2014.

Shoppers will notice the Galaxy S5 back first and the new color options second. The back of the Galaxy S5 is textured with small dots that make the phone easier to grip than the Galaxy S4. This is still a plastic design, but it feels less like cheap plastic based on our time with the device.

Samsung offers the Galaxy S5 in four colors; white, black, gold and blue. While there are proper names, these are what we expect consumers and salespeople will call the options. Samsung matches the iPhone 5s color options and includes a popular blue color that caught the eyes of many users. 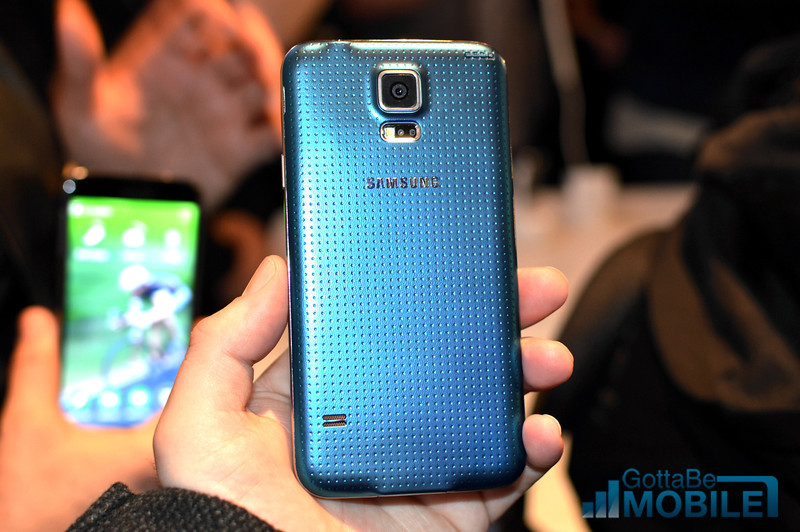 The Galaxy S5 is water-resistant and dust-resistant thanks to a new seal on the back cover and other enhancements. This is not a waterproof phone, so users cannot take it swimming, but it can survive for 30 minutes in up to one meter of water. This means it can survive puddles, kids, dishes and other brushes with water that the Galaxy S4 and iPhone 5s cannot without a case.

The Galaxy S5 home button includes a fingerprint reader that unlocks the Galaxy S5 for users instead of a password. This feature is similar to the iPhone 5s, but Samsung offers additional features that tie into the scanner. 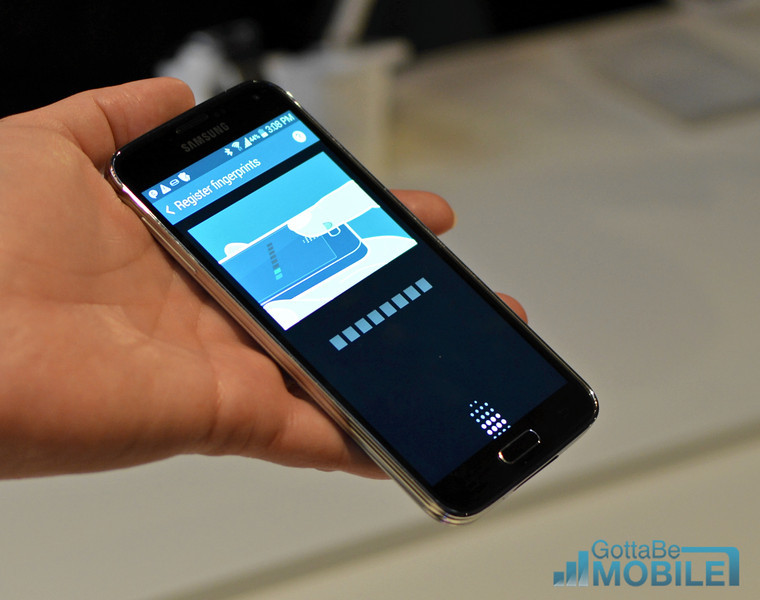 Users can secure files with Private Mode, which locks pictures, videos and more behind a fingerprint so that they are secure. The fingerprint reader also works with a PayPal app that lets users make mobile payments with a fingerprint.

The Samsung Galaxy S5 includes a pulse sensor on the back that is capable of taking a user’s pulse and tracking it over the course of a workout, day or long term using the new S Health 3.0 app. 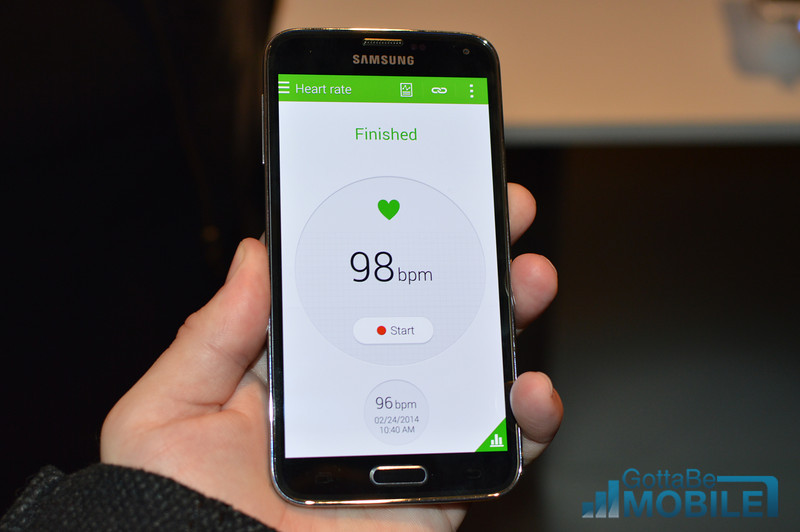 The Galaxy S5 features a pulse meter that can take a user’s pulse.

S Health 3.0 can also work with devices like the Gear Fit, a new wearable band that connects to the Galaxy S5 and other devices to share fitness information and can also show alerts and notifications. Samsung hopes the S Health and fitness apps can fill the need of a trainer for users that need help tracking fitness and working out at the right pace and levels.

The Samsung Galaxy S5 features a 16MP camera that includes four big enhancements over the Galaxy S4. This new sensor offers twice as many megapixels as the iPhone 5s, but this does not automatically mean it is twice as good. We’ll be comparing the Galaxy S5 camera performance when it arrives in the near future.  Here are the big new Galaxy S5 camera features. 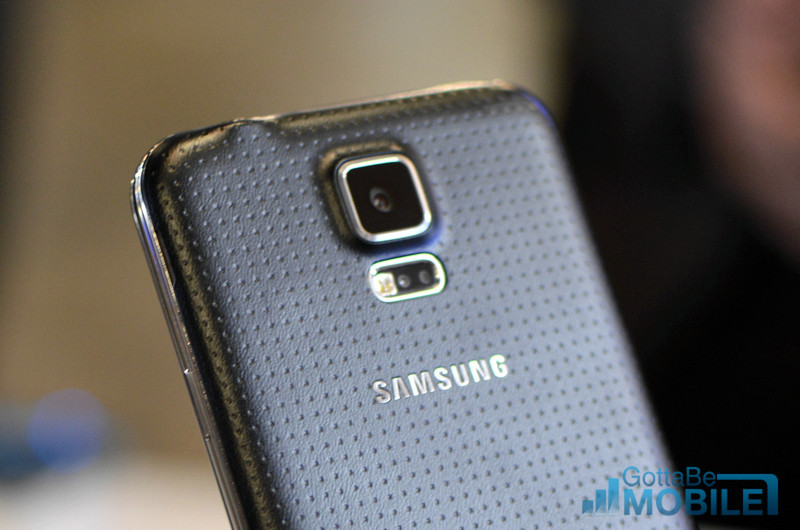 Faster Auto Focus – The Galaxy S5 camera sensor and companion chip combine with a hybrid auto focus to help the camera focus faster, as fast as 0.3 seconds. This means users should be able to focus quicker and take a shot faster than on the Galaxy S4, for fewer missed photos and better looking photos that are in focus.

Selective Focus – Users can choose the point of focus in an image. This allows users to blur the background on a portrait or focus just on something farther away for a more dramatic or professional looking photo without the need to grab a DSLR.

Improved HDR – The Galaxy S5 HDR performs better in low light and very bright light according to Samsung and it can also deliver a real time image on screen so users can see what an HDR image will look like before pressing the shutter. The camera can also use HDR in video mode.

4k Recording – Users can now record in 4k, the new high definition standard, like the Note 3.

In addition to these features users will appreciate a IR port that can control a TV and home theater, a USB 3.0 port for faster transfers from a computer and faster WiFi connectivity.

The Galaxy S5 ships with Android 4.4.2, the latest version of Android that is available. Samsung includes a new version of TouchWiz on top of this to give the phone the Samsung look that is familiar to users upgrading from a earlier Galaxy device.

Samsung changed the look of TouchWiz slightly for the Galaxy S5, but users will be familiar with where many common settings and features are. The Galaxy S5 software video below shows some of what the new Galaxy S5 TouchWiz is capable of.

The Samsung Galaxy S5 also includes a Kids Mode that allows parents to limit access to apps with a tap. Parents pick the apps that kids have access to and can also set time limits.

The Samsung Galaxy S5 replaces the Galaxy S4 as the flagship smartphone from Samsung, but the Galaxy S4 will remain on store shelves. There are a number of differences which we share in the video below.

Shoppers should look at five major differences between the Galaxy S4 and the Galaxy S5 to see the differences  which include screen size, design, camera, processor and a home button with a fingerprint reader.

The Samsung Galaxy S5 and iPhone 5s are sure to be compared by smartphone shoppers looking for the best smartphone in 2014. There are obvious differences like size, screen size and plastic versus metal to consider. The video below shows a hardware comparison of the Galaxy S5 and the iPhone 5s.

Potential buyers can read on for more about how the Galaxy S5 and iPhone 5s compare before buying a new phone in 2014.

The Samsung Galaxy S5 and Galaxy Note 3 are the most recent Galaxy devices from Samsung. The Galaxy Note 3 offers two major features not found on the Galaxy S5 – a much larger screen and an S Pen stylus. 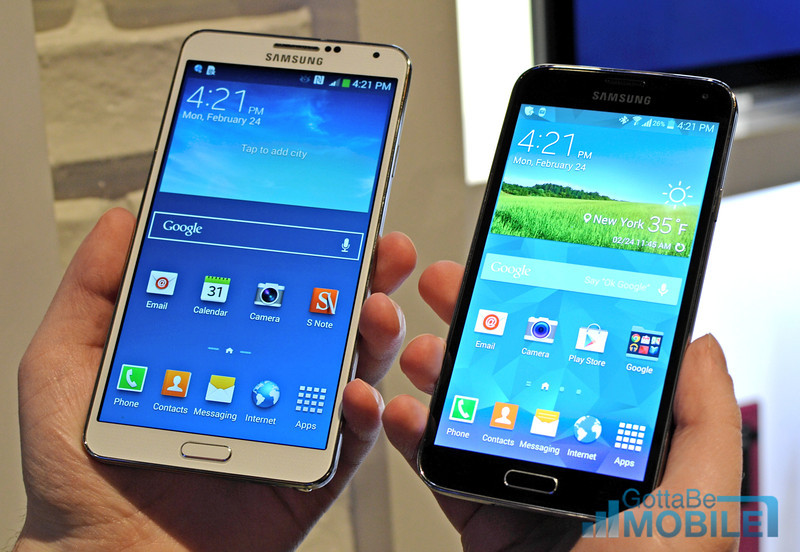 Check out more of the Galaxy S5 vs Galaxy Note 3 differences to see how these top devices compare.

The Samsung Galaxy S3 is two years old, which means many users may be looking at upgrading from it to the Galaxy S5. There are a number of important differences between the Galaxy S5 and the Galaxy S3.

Users also get access to a new home button with a fingerprint reader, a better camera with new features explained above and a faster processor.