With the Galaxy S6 launch date just days away, we’re starting to see key Galaxy S6 rumors start to firm up. In the past week, we’ve seen the Galaxy S6 price, Galaxy S6 design, and Galaxy S6 release date emerge in a steady pace of rumors as Samsung works behind the scenes to get its Galaxy S6, and Galaxy S6 Edge, ready for public consumption.

Earlier this week, three U.S. carriers confirmed the Galaxy S6 for arrival sometime later this year. AT&T, Sprint and T-Mobile all posted sign up pages that hint at a release of a curved Galaxy S6 sometime in the future. AT&T’s teaser page helped to narrow the Galaxy S6 release to Spring 2015 though it didn’t spell out any specific dates.

Thanks to a Sprint employee on Reddit, we’ve been able to narrow the Galaxy S6 release date in the United States down a little further. A new teaser for a contest not only shows the Galaxy S6 and Galaxy S6 Edge, it also puts a date on display in the bottom right corner. Sprint’s Galaxy S6 contest will supposedly end on March 26th, a sign that we’re probably not going to see the Galaxy S6 release arrive before that.

This new teaser, at the very least, hints at a release shortly after the Galaxy S6 launch date on March 1st. Contests typically aren’t held several months ahead of a public release so at this point, with Samsung Galaxy S6 release date rumors hinting at an arrival in March or April just a few weeks after the official announcement. 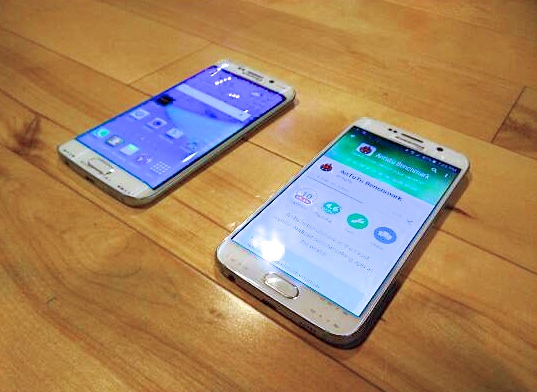 Earlier this week, a report from Indian publication IBN Live, citing insider sources, claimed that the Galaxy S6 release date in India will take place during the second week of April. The timing falls into the usual Galaxy S release window. The publication also notes that Galaxy S6 pre-orders in India will start in March ahead of its April release.

While those dates may not be concrete, it’s clear that companies are preparing for a fast Galaxy S6 release. We recently discovered a placeholder for the Samsung Galaxy S6 inside of a Best Buy location, yet another sign that the Galaxy S6 release in the U.S., and perhaps in general, could come a little bit faster than years past.

Accessory maker Montblanc also recently posted its cases for the Galaxy S6 and Galaxy S6 Edge, the devices seen in the Sprint contest teaser. The company has since pulled its accessories though the arrival of the company’s announcement is yet another sign that we’re probably very close to the release of Samsung’s Next Big Thing.

We expect a glass back and metal frame on the Galaxy S6.

The Samsung Galaxy S6 is expected to be a significant departure from previous Galaxy S releases. The device is expected to feature a new design in addition to heavily upgraded specifications including tweaked TouchWiz UI over Android 5.0 Lollipop. The company is rumored to have stripped down TouchWiz to improve performance.

The devices shown in the Sprint teaser match the Galaxy S6 photos that leaked out earlier this week. Those photos, which appear to show AT&T versions of the Galaxy S6 and Galaxy S6 Edge, show off many of the new design elements that Samsung’s expected to pack into the next Galaxy S smartphone. Both are rumored to be made of glass and metal.