While the Galaxy S6 and the iPhone 6 Plus could almost pass as twins when you look at just the bottom edge of the device the two devices are different in many important areas that buyers need to consider. While we wait for the Galaxy S6 release date and pre-orders to start, you can use this comparison to figure out which device fits your needs best.

There are some changes from the Galaxy S5 to Galaxy S6 that remove popular features like a replaceable battery and a Micro SD card slot, which makes the Galaxy S6 a bit more like the iPhone 6 Plus,  but Samsung is counting on a number of official Galaxy S6 accessories and a healthy amount Galaxy S6 features that will convince consumers to buy their offering.

Here are the most important Galaxy S6 vs iPhone 6 Plus differences that you need to know today.

Here are the most important differences between the Galaxy S6 vs iPhone 6 Plus comparison that we can share before we go hands on with the two devices.

The Galaxy S 6 display is smaller and offers a curved edge option.

The higher resolution on a smaller screen delivers more pixels per inch, which means it should be able to show more detail on an image than the larger screen. The Galaxy S6 offers 577 pixels per inch while the iPhone 6 Plus only offers 401 pixels per inch.

There is no more plastic in the Galaxy S6. Samsung delivers a metal frame and a glass back that is made of Corning Gorilla Glass 4. The iPhone 6 Plus is made of metal that wraps around the back and a chemically strengthened glass on the front. 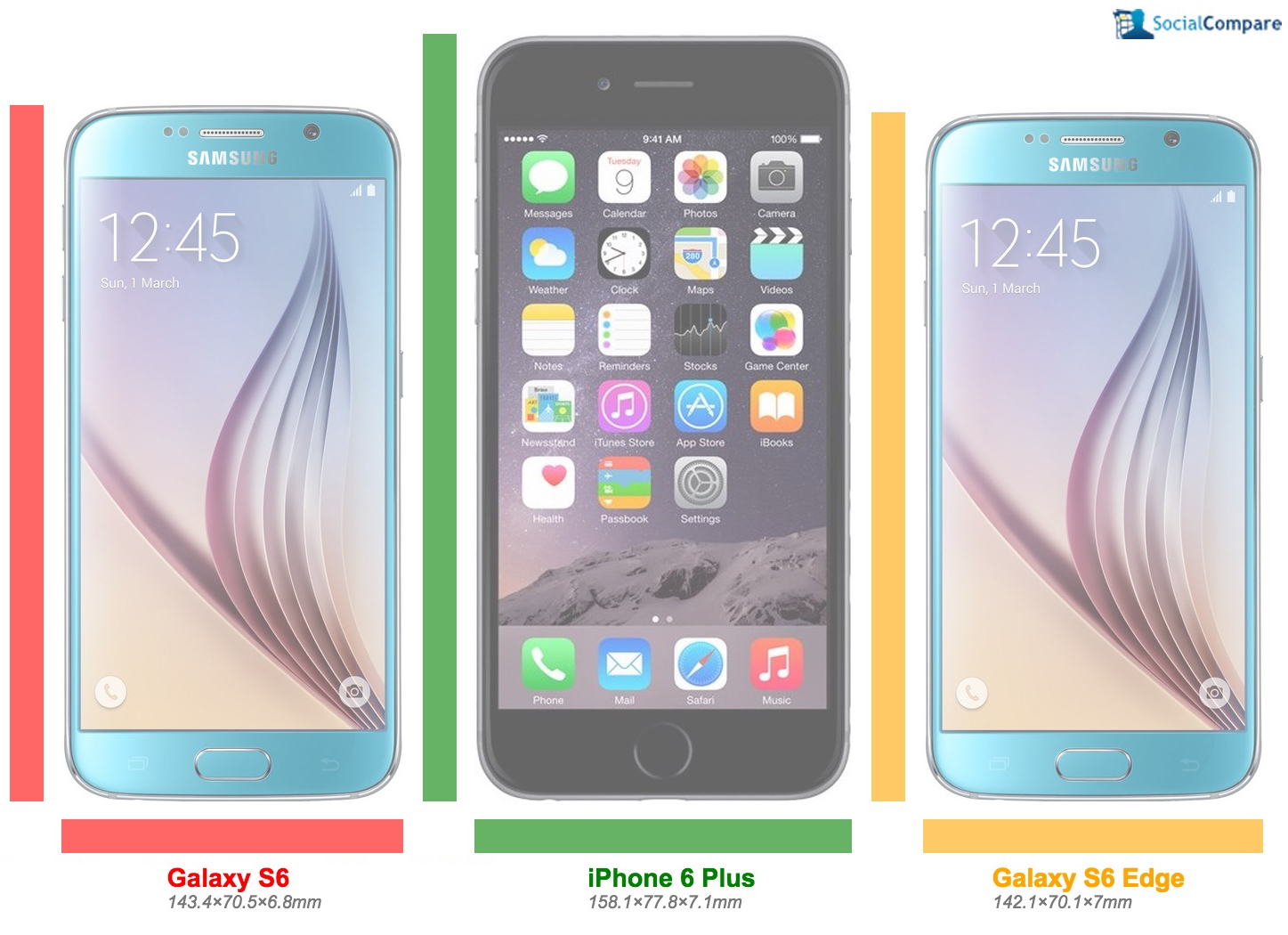 A Galaxy S6 vs iPhone 6 Plus vs Galaxy S6 Edge size comparison.

The glass on the front of the iPhone 6 Plus curves to the edge, but it is not a curved display like the Galaxy S6 Edge model. Both designs include a fingerprint sensor and a physical home button, a headphone jack and a single speaker on the bottom.

The Samsung Galaxy S6 runs Android Lollipop, also known as Android 5.0. Samsung usually delivers a lot of added features and software, but this time around the company is keeping customizations to a minimum. The new Galaxy S6 Android Lollipop software features fewer on-screen elements and Samsung claims it is easier to get where you want in fewer steps.

“We have fewer preloaded apps and removed about 40% of the features and steps.” explained Lee Hyunyeul, VP, UX Innovation Group in a tweet shared by Samsung. There are still features like the Samsung Health app and a fingerprint sensor on the back of the device plus some pre-loaded software. The Galaxy S6 Edge can show notifications using the edge of the screen when placed face-down with a different color to show who is calling. Check out the other 25 Galaxy S6 features you’ll love to get an idea of what else the Galaxy S6 can do.

The iPhone 6 Plus runs iOS 8.1.3 and will soon run iOS 8.2 that adds support for the Apple Watch. Apple ran into a number of problems with the iOS 8 software, but the company is making strides in correcting lingering problems. With iOS 8 Apple adds in new features that open up access to third-party keyboards, the ability to quickly link into other apps and to use apps like LastPass inside Safari to log in to a web page.

You can see what’s new in iOS 8 in the video above. There are some things that the iPhone 6 Plus does better than the Galaxy S6 and some that the GalaxY S6 does better, but overall the two devices are closer in capabilities than their predecessors.

One thing that both of these phones definitely have in common is that there is no easy way to add more storage to the phone without dangling a USB drive off the bottom. There is no Galaxy S6 Micro SD card and the iPhone 6 Plus doesn’t offer expandable storage either.

Both phones also offer 64GB and 128GB options. Apple charges $100 more for each storage jump. We don’t know how much more Samsung and carriers will charge for the higher capacity Galaxy S6.

The Galaxy S6 and iPhone 6 Plus both offer mobile payment options, but there is a big difference in where you can use them. Both phones include NFC that can make payments with Google Wallet or Softcard on the Galaxy S6 and Apple Pay on the iPhone 6 Plus, but the Galaxy S6 and S6 Edge also offer another option. The new Galaxy S6 supports wireless magnetic card payments, through Samsung Pay. This allows users to place the phone next to a regular credit card reader to send a swipe wirelessly. This is a form of payment that will work in more places than NFC payments.

Samsung delivers improved cameras on the front and back of the Galaxy S6 and Galaxy S6 Edge. There is a 16MP rear facing camera with Optical Image Stabilization and a 5MP front facing camera. Both offer a f/1.9 aperture that lets in more light than a typical front facing camera and Auto-Live HDR on the front and back cameras. The Auto Live HDR will show you what the HDR photo will look like before you take it, while the iPhone 6 Plus HDR mode only shows you after you take the photo.

The iPhone 6 Plus features a 8MP camera with focus pixels that is one of our go to cameras for shooting video and photos of review devices on the go. Even though there is a big difference in MP count, don’t let that fool you. The iPhone 6 Plus camera is incredibly good. The rear camera also includes Optical Image Stabilization to help with low light photos.

The iPhone 6 Plus camera delivers excellent photos and videos.

The front facing iPhone 6 Plus camera isn’t nearly as nice with just a 1.2MP sensor and 720P HD video resolution. The Galaxy S6 should take better looking selfies and deliver better looking video calling. To launch the Galaxy S6 camera double press the home button and it will open in 0.7 seconds according to Samsung. The iPhone 6 Plus camera shortcut launches with a swipe up after you turn the screen on with a press of the power or home button.

Another area of difference is the camera app. Samsung toned down the customizations and options, but the Galaxy S6 camera app still offers more options like selective focus, fast motion, pro mode, virtual shot and the ability to download new modes. The iPhone 6 Plus camera doesn’t offer as many options, and while you can add some features with other apps you cannot get to them as fast as the default camera app.

So far we’ve seen a $699 off contract Galaxy S6 price listing, but that is part of a contest and those can over-estimate the retail price that we see. Odds are good that the Galaxy S6 price is $199 on contract with a premium for more storage of either $50 or $100 per jump and the Galaxy S6 Edge price is likely $299 on a two-year contract if it sticks to the same premium Samsung uses to separate devices.