The new Galaxy Tab 2 has a 7 inch display, 1Ghz dual core processor and comes with 3G and WiFi connectivity as well as the latest version of Android, found on only a few tablets. No details were announced about which carriers it will support, but I wouldn’t be surprised to see the Galaxy Tab 2 for Verizon and AT&T. 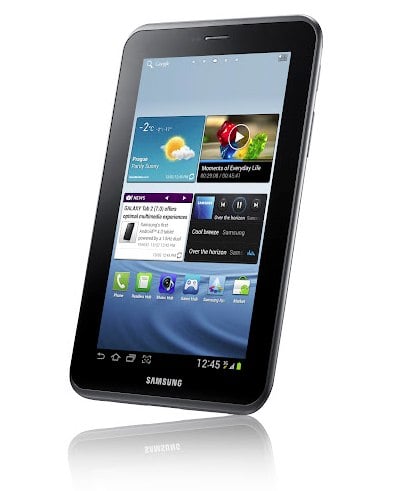 The Samsung Galaxy Tab 2 has a 7 inch display and Ice Cream Sandwich.

Samsung has not announced pricing for the Galaxy Tab 2, but has confirmed a U.S. launch in March. With the Galaxy Tab Plus available for $350, I wouldn’t be surprised to see a WiFi Galaxy Tab 2 in that price range, or lower as Samsung looks to bite into Kindle Fire and Nook  Tablet sales.

Samsung includes a host of built in software that adds to the user experience including the Music Hub, Readers Hub and Video Hub. I love the Video Hub, which offers easy access to movies and TV shows at reasonable prices for renting or owning. If you have a Samsung phone and a Samsung tablet with Video hub, you can buy once and watch on any of your devices with no hassles.

The Galaxy Tab 2 includes AllShare Play, a new service from Samsung that lets you stream music and multimedia from your computer or smartphone to your Galaxy Tab 2, similar to the MotoCast service included with many Motorola smartphones and tablets.

Android 4.0 offers a more refined user interface and will soon unite the smartphone and tablet platform on a common version of Android. Ice Cream Sandwich allows faster access to things like settings and a better notification management. Many tablets are on the list to get an Ice Cream Sandwich update, including those launched this past month, so consumers will appreciate that the Galaxy Tab 2 ships with the latest version of Android.

Have you been waiting for a new 7 inch tablet?