With all the excitement around the Samsung Galaxy S5 smartphone, many forgot Samsung has an entire tablet range that’s still quite popular, and they’re about to refresh the entire offering.

Not to be confused with the Samsung Galaxy Tab PRO line released earlier this year, the regular and more affordable Galaxy Tab line is now on its 3rd generation, but the all new Galaxy Tab 4 (7-inch) leaked earlier today. Courtesy of @evleaks we’re getting our first glance at the 7-inch Galaxy Tab 4, which should also come in an 8 and 10.1-inch option. 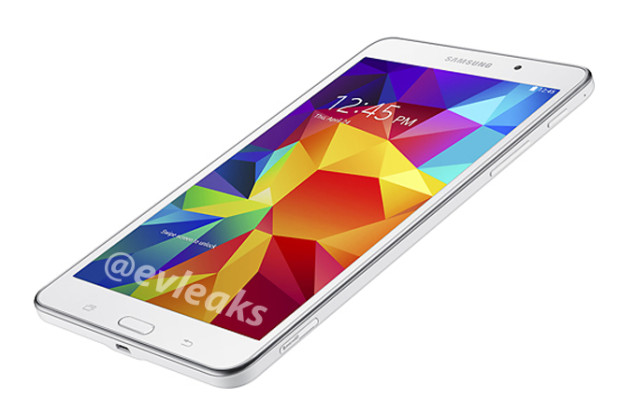 Similar to the new Galaxy Tab PRO and Galaxy S5, the entire design and style has been changed to match the rest of Samsung’s devices. Offering the classic three button layout on bottom, and Samsung’s iconic home button, there’s not much to see here we haven’t seen before.

Samsung’s been known to stick to its designs, and we’re seeing an extremely similar overall device here today. It looks like the Galaxy Tab lineup will come styled similar to the new Galaxy Note 3 and Tab PRO family, and could even offer the same faux-leather design on the rear.

Rumors have the fourth generation Galaxy Tab 7-inch offering a 1280 x 800 HD display, 1.2 GHz quad-core processor with 1GB of RAM, and likely running Android 4.4.2 KitKat. Samsung’s current Galaxy Tab 3 7-inch is a cheap budget tablet sold from many US carriers for $79 on contract, so we’re not expecting too much for the newer model later this year.

Specs like that this new tablet won’t battle the Nexus 7 overall, but could be quite cheap and battle it in regards to the price tag. With leaks finally starting to appear, we can expect more details about the entire Galaxy Tab 4 tablet lineup to arrive sometime soon.