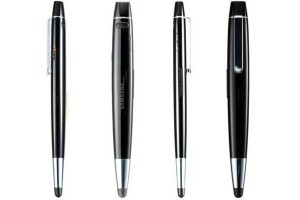 I’m guessing Samsung doesn’t quite feel the way Steve Jobs does about using a stylus. At least after seeing this post from Engadget linking to Play.com this morning. Apparently details are starting to pop out on a Galaxy Tab Bluetooth Stylus.

Looks like the UK price is set at £49.99. Though not officially announced by Samsung yet, it looks like a capacitive stylus and that it is Bluetooth multi-point capable, allowing you to connect it to two devices simultaneously. Apparently it can also allow you to accept and reject phone calls.

Gosh, I hope we don’t live through that all over again because, you know, it worked so well the last time around.