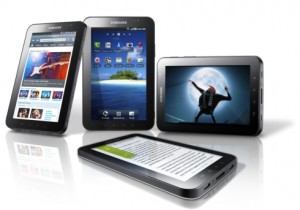 Samsung is holding its big US press event in New York City tonight and they’ve just confirmed that the Galaxy Tab will indeed be coming to all four US carriers (AT&T, Sprint, Verizon, T-Mobile) this year (the press release says “in the coming months”, and there is a WiFi version in the works as well. No confirmation at this point as to when that Wifi only version will be available. Curiously, the press release doesn’t mention the WiFi version, but even more interesting is that the press release doesn’t list the price of the Tablet itself, though it does list prices for the accessories.

Samsung is also set to announce its Media Hub, a media portal where users can purchase or rent content. Again, scanning the press release the language is very interesting as it says:

In addition, the Galaxy Tab will include future access to Media Hub, Samsung’s own content service, offering a vast lineup of critically acclaimed films and TV programs for rent or purchase. Samsung is working with the biggest and best names in entertainment, including MTV Networks, NBC, Paramount and Universal Studios Home Entertainment to assemble a full library of movies and TV programming, including new release films, next day TV episodes and even full TV show seasons. Media Hub also allows the user to expand the entertainment experience, allowing content purchased to permanently own to be shared with up to five devices that carry the Media Hub application.

It’s the “future access” part that has me curious. There’s a lot of coming soon and future being talked about.

Of course we all know the specs by now for the device, but here’s a recap for those who might not have been paying attention.

It looks like Samsung is going to not mention pricing at this point, leaving that to the carriers. So, guess we’re still in wait and see mode. I’m not at the event and am following this on line, but it seems to me that the Samsung Galaxy Tab story in the US stops cold until pricing and carrier contract info are defined. 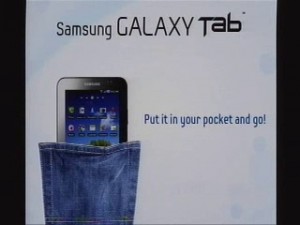