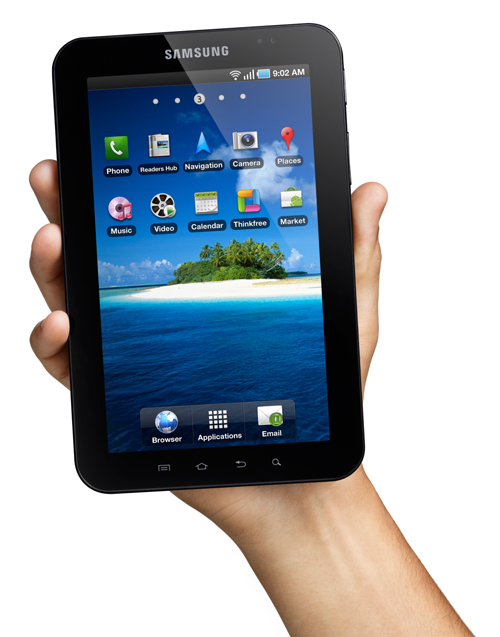 The Samsung Galaxy Tab is being released now in the US, at least on T-Mobile. Those wanting to choose the other carriers will have to wait a few days or so. So, the reviews from the major US media are coming out. Here’s a quick roundup of the ones I found of interest. As expected the reviews contrast and compare to Apple’s iPad and most say this is the first real competitor to Cupertino’s juggernaut.

There’s not much new information in the reviews but there is some. I was surprised to learn that the Galaxy Tab won’t charge when hooked up to a computer via USB but only when plugged into an AC outlet. Battery life seems to come in at around 6 hours or so according to the reviewers. Most of the reviewers play into Steve Jobs’ anti-Adobe Flash campaign by saying that Flash works on the Galaxy Tab but with issues. Apparently browsing on the included browser won’t let you choose whether you want to view a web site in its full glory but instead locks you into the mobile version of that site. Most of the reviewers seem impressed with the Apps that Samsung includes, but seem surprisingly perplexed that there isn’t much of a selection for a 7 inch Tablet/Slate in the Android Market. An interesting upside for SMS fans is that you can send unlimited text messages, at least on T-Mobile. I’m not sure about the other carriers.

Anyway, here’s the roundup. I’m sure there will be more of interest. Who’s getting a Galaxy Tab?

CrunchGear: This is the Android Tablet You’re Looking For