The Galaxy Win will boast a 4.7 inch WVGA display, 1GB of RAM, a 1.2 GHz quad-core processor, and a 2,000 mAh battery. Digital photography will come by the way of two cameras, a rear-facing 5 megapixel camera and a front-facing VGA camera. Connectivity options will include Bluetooth 3.0, and DLNA media streaming support.

Though the device will ship with 8GB of internal storage, users can add another 32GB of storage via a microSD card slot. All of this will be wrapped in a 133mm x 70.7mm x 9.64mm plastic casing that takes its design cues from the upcoming Samsung Galaxy S4, and Samsung’s current flagship the Samsung Galaxy S3. Users will be able to pick up a Samsung Galaxy Win in both Ceramic White, and Titan Gray. 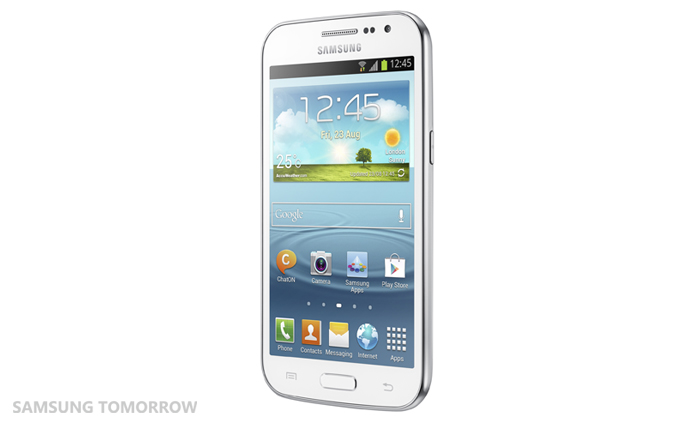 Depending on the user’s market, the device will ship with dual SIM card slots for easily switching between multiple numbers and providers. So far, Samsung has provided no Galaxy Win price details.

If there was any doubt that Samsung would be targeting mid-range customers with the Galaxy Win, news of its ‘Easy Mode’ will solve that. Just as the LG Lucid 2 will ship with an Android skin designed to make the smartphone experience easier for first time buyers, the Galaxy Win will ship with what Samsung is describing as “a simple and intuitive homescreen mode for streamlined access to top functions”. Enhanced options for notifications of events, calls, and deadlines will also ship on the device. An included Motion UX app will auto mute, refresh, and update apps by performing motions with the device.

In contrast, Samsung’s Galaxy S4 will ship with a 4-inch 1080p resolution display, a quad-core processor with a 13 megapixel camera. That device is scheduled to debut on AT&T, Verizon, Sprint, & U.S. Cellular and other carriers worldwide sometime in the second quarter –between April, May, and June. It will act as Samsung’s new high-end device.