Samsung announced the Gear 2 and Gear 2 Neo smartwatches at Mobile World Congress in Barcelona today. The two watches replace the Galaxy Gear, which got a lukewarm reception last fall. The new Samsung Gear 2 smartwatches are sleeker, packed with more fitness features and compatible with more phones. Samsung is expected to launch the Galaxy S5 flagship in the coming days at Mobile World Congress.

Right out of the box the Gear 2 and Gear 2 Neo can  receive calls, display notifications, pass S Voice commands to Galaxy smartphones and more. Samsung will offer a range of downloadable apps including ChatON, flashlight and Voice Memo. 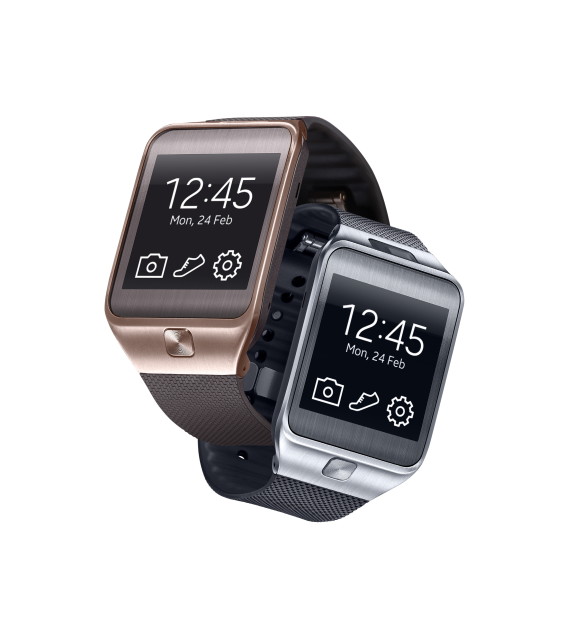 Samsung isn’t using the Galaxy branding on the two new watches because they don’t run on Android like the original Galaxy Gear.  Instead the Samsung Gear 2 runs on Tizen, the company’s own mobile operating system. The Gear 2 smartwatches will be compatible with Samsung’s range of Galaxy smartphones.

The Gear 2’s camera is now on the top bezel rather than embedded into the camera strap. The Gear 2 Neo lacks a camera altogether and will presumably be sold at a lower price. Samsung did not say how much either of the smartwatches would sell for when they launch in April.

The Gear 2 and Gear 2 Neo can track users’ health and fitness thanks to an array of sensors. The smartwatches can measure heart rate, stress, sleep patterns and steps. It can also be used to track runs, walks, runs and hikes. 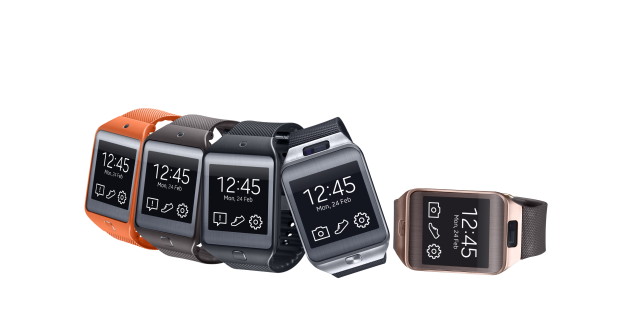 While the Gear 2 and Gear 2 Neo are primarily companion devices, Samsung did build in a standalone audio player. That means users can listen to music through Bluetooth headsets when exercising without having to lug their smartphones along.

As good as the Gear 2 and Gear 2 Neo sound on paper, it might be worth waiting before getting too excited about the device. In a statement, Samsung’s CEO said that the Gear 2 and Gear 2 Neo “have enhanced everything consumers love about the Gear…”  While we can understand why Shin is putting the older Gear in the best light possible, the truth of the matter is that the Galaxy Gear was a major flop. Its $300 price tag was tough to swallow, especially since it costs more than what many Samsung customers spend on their smartphones after carrier subsidies.

You can watch our full Galaxy Gear review above and or click here to read more.

While wearable technology is gaining traction, we still haven’t seen an outright home run in the wearable companion space. Fitness trackers from companies like Jawbone, Nike and FitBit have sold quite well, but devices like the Galaxy Gear and Google Glass that duplicate many smartphone features haven’t gone mainstream yet.

Samsung isn’t the only company that hopes its wearable devices will appeal to the masses. Apple is reportedly working on the iWatch and there were hundreds of companies promoting wearable technology at CES 2014.