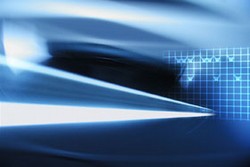 100mb wireless speeds by 2010? Samsung certainly thinks so and is demoing technology that proves it is coming, at speeds 30 times faster than current broadband. I can certainly get used to 100mb wireless, can you?

Samsung Electronics Co. showed off its vision for the future of mobile technology Thursday, sending data wirelessly at blazing speeds to a moving minibus.

The connection was robust enough to support live images — including a high-definition movie — beamed from a conference the South Korean company is hosting here on fourth-generation, or 4G, wireless.

In a key step toward making the technology truly mobile, the device aboard the minibus switched seamlessly between two base stations — meaning the signal won’t be lost when users are on-the-go.

The current prototype allows data transfers of 100 megabits per second, about 30 times typical broadband Internet speeds. It works even when the receiver is moving as fast as 75 mph.

But the promise is still far off: Currently, Samsung’s data receiver is the size of a compact refrigerator. It won’t be until 2008 that the device can be shrunk to fit in a mobile phone, said Lee Ki-tae, head of the company’s telecommunications division.

And even then, frequencies need to be allocated and standards set, meaning the devices aren’t expected to be in consumers’ hands until after 2010.