It doesn’t happen too often, but AT&T has put out a hilarious spider commercial for the new Samsung Infuse 4G Android smartphone featuring the high end 4.5″ Super AMOLED display that, if commercials are to be believed, will cause your coworkers to freak out.

In the Samsung Infuse 4G Spider commercial, a prankster puts his new Infuse 4G down on the table with a spider on the display and scares a coworker, but thankfully “Dave” is ready with his shoe. Unfortunately, the Infuse 4G doesn’t look like it can withstand a hammering by Dave’s shoe. 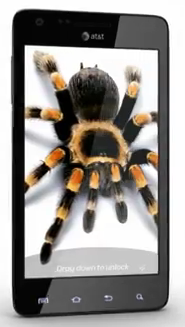 The Samsung Infuse 4G is available from AT&T for $199 with a two year contract.