This week, we’ve seen patent applications being filed for various smartwatch accessories–Apple had filed for the iWatch brand in a number of countries and Qualcomm was revealed to apply for the TOQ trademark–and the latest to join the wearable computing market is Samsung with its application to trademark for the GEAR brand. At a cursory glance, GEAR could encompass any number of accessories, like Samsung’s S Band, Heart Rate Monitor, and Body Scale accessories that were introduced alongside the Galaxy S4 flagship’s launch, but a closer examination shows that this could become the moniker for Samsung’s watch. 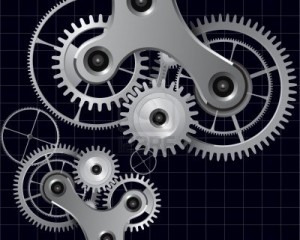 In a description for the GEAR name, Samsung says that the mark could be used to describe “watches, clocks, wristbands, bracelets and the like which can communicate with phones, PCs and tablets using the internet and other communication methods.”

It’s unclear if GEAR will be its own separate product line, like Galaxy is for Android and ATIV for Windows products, or if it’s specific to wristwatches.

Phandroid reports that the Samsung GEAR brand for wearable smart wristwatches make sense as gears have long been associated with helping watches work in the past.

Samsung had confirmed that it is in fact working on a wearable smartwatch, but did not elaborate further on its plans or what the product would be named. We’ve seen leaks as well that show that Samsung’s wristwatch may either be based on the Android operating system from Google with a special UI overlay, similar to TouchWiz for phones, or that it may come with a separate OS from Samsung called the Altius OS.

Whatever the case, the wearable smartwatch market is beginning to heat up. Rivals Apple and LG are rumored to be working on their versions with the former recently announcing that it has hired fashion house head from Yves Saint Laurent to potentially help with that endeavor. Sony has already announced its SmartWatch 2 recently, and partners Microsoft and Google may be working on their own concepts.