Today Samsung made its fictional game Unicorn Apocalypse a reality in the Google Play Store, giving Android users a chance to see the game from its recent ads.

The game Samsung released in the Play Store is actually the result of a contest to create the game discussed in the recent ads for the Galaxy S3 and Galaxy Note 2. Unfortunately, it seems the hipsters in the ad may have created a better game than the one that Samsung chose as the winner.

The game comes from Liquid Gameworks which previously created Monstrous and Ant Smasherz for the Barnes & Noble Nook and Amazon Kindle Fire.

Unicorn Apocalypse is something of a mix between Canabalt and Adult Swim’s Robot Unicorn Attack. In the game users play as a unicorn running across rooftops trying to avoid bear traps and kill the men who captured it. Users can jump, dash and attack enemies with a horn missile.

The game, sadly, doesn’t control very well, and would probably languish in the Play Store unnoticed if it didn’t share the name of the fictional game in Samsung’s ads. 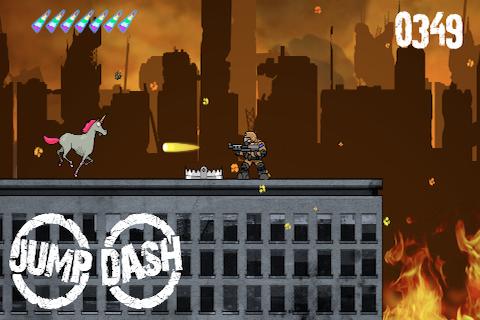 Even without the poor controls the game doesn’t work well as many users report a glitch where the unicorn jumps into a wall of fire after the first level and doesn’t advance at all. The game still awards the play points, but there is no unicorn on screen.

Unicorn Apocalypse is available for download on all Android devices, for curious users. No matter the quality of the ads, the game just simply isn’t very good.

Samsung may hype the new game when it launches the Galaxy S4 this week. Hopefully it will just let the app die quietly, but that seems doubtful. With all the ads talking about the game, Samsung has to at least acknowledge it when it finally lets Jeremy open the box to reveal the Galaxy S4.