After Apple announced the iPhone 5 Samsung went on the offensive with a new print ad, and now Samsung released a video ad to attack the iPhone 5 and those who wait in line for it.

Like the famous Samsung barista ad this new ad shows a variety of people waiting in line for the new iPhone 5 talking about the new features. The ad mocks the new Lightning port and the lack of some features like NFC.

The line sitters in the ad also point out features that seem small and proclaiming them “mind-blowing.” Samsung uses changes like the change in the headphone jack placement and the all-digital Lightning connector to show how excited Apple fans get over small changes.

Of course, others in the ad show up with the Samsung Galaxy S III to show off the features. The Galaxy S III users show off NFC by using S-Beam to share a playlist. The ad also shows off the S III’s larger screen, 4G LTE, and the ability to watch videos and perform other tasks at the same time. 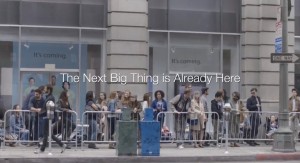 Samsung even goes so far as to hint that younger users don’t want an iPhone 5 because it’s the phone their parents will want as well.

We’re not sure how much sense it makes to insult users in order to sell them on a smartphone, but it might work for Samsung somehow.

We’re just glad Samsung didn’t feel the need to use terms like “Palm Touch Mute Pause” or inconvenient features like having to swipe a hand across the screen to take a screenshot instead of just pressing buttons.