Over the past few months the iPhone 6 rumors have continued to arrive, and recently they’re at full speed with talks of a larger 4.7-inch display, and maybe even a larger 5.5-inch iPhone variant.

More and more reports have surfaced claiming the iPhone 6 will indeed have a large 4.7-inch screen, and we’ve seen various panels, prototypes, and dummy units to back up those rumors. Finally, a large-screen iPhone could finally be coming in 2014. That being said, smartphones with big, bright, 1080p HD displays have been available for a long time, and Samsung’s taking a moment to remind everyone of that.

Earlier this year Samsung announced the company’s all new Galaxy S5 with a beautiful and brilliant 5.1-inch 1920 x 1080 full HD display. One that replaced the 4.99-inch 1080p screen with the Galaxy S4 from 2013. With more and more rumors talking about a large 4.7-inch screen on the iPhone 6, Samsung’s using them to take shots and poke fun at Apple. 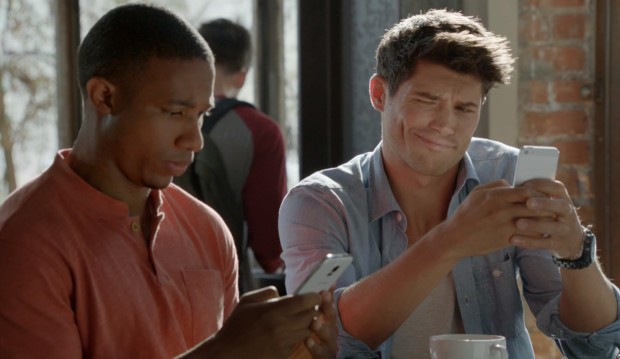 Lately we’ve been hearing the large 5.5-inch iPhone 6 has been delayed, and won’t arrive around the same typical iPhone release date as originally expected. That is, if the rumors of a large phablet-sized iPhone were true to begin with. That said, the 4.7-inch iPhone 6 is still on track, and Samsung’s having a little fun with it by reminding prospective buyers that are patiently awaiting its arrival that a big screen is nothing new.

Samsung’s last three major smartphones have all launched with screens bigger than the upcoming iPhone 6. The Galaxy S III from 2012 had a bigger screen coming in at 4.8-inches, and Samsung wants the world and all its Apple fans to know it. Just released this week is a brand new ad spot called “Screen Envy” where they joke about Apple being two years behind, and remind buyers to check out their latest Samsung Galaxy S5 smartphone.

Samsung’s add starts off with one loyal fan excited about an iPhone 6 with a larger display, but then reminds those watching that iPhone owners have had screen envy for over two years. They continue by saying a bigger, better display was right in front of them the entire time. Of course Samsung’s talking about its new Galaxy S5, but the same argument applies for many of their smartphones released over the past two years. From the Galaxy S3 to the Galaxy Note 2 and more.

This isn’t the first time we’ve seen Samsung take the attack approach towards Apple, but with a large iPhone 6 quickly approaching they’re back on the defensive thinking and are in full attack mode. The new Samsung ad goes as far as joking about Apple using those fancy words to describe the next iPhone, by saying it will be “awesome” or “blow your mind” then once again flashes the all-new Galaxy S5 on the screen.

The incoming iPhone 6 will have a larger display, run a brand new and highly improved iOS 8 operating system, and have tons of new features we’ve never seen before. One being that nearly indestructible sapphire crystal display covering your now larger 4.7-inch screen.

It may have a bigger display and be durable, but the larger, better, 5.1-inch full 1080p HD Galaxy S5 (that’s also water-resistant) has been available all along, and Samsung is making it known.

It’s clear that Samsung and Apple are fighting tooth and nail for smartphone buyers these days, and this ad is a sign that Samsung’s worried about the new iPhone 6. Even if it does end up being everything and more that Apple users are waiting for, rumor has it a new Galaxy S5 Alpha is in the works to steal even more consumers to the Samsung side.