When it comes to music options on our Android devices, they’re a dime a dozen. Everything from Google Play Music, Pandora, Spotify and tons of others.

Apple has iTunes Radio, delivering quality music streaming to iOS devices, and now Samsung is offering something similar for its flagship high-end devices. Officially launched today is the all-new Samsung Milk Music. Name aside, this is an ad-free music streaming service for Samsung users, and it won’t cost you a cent. Completely free music streaming provided by Slacker Radio. 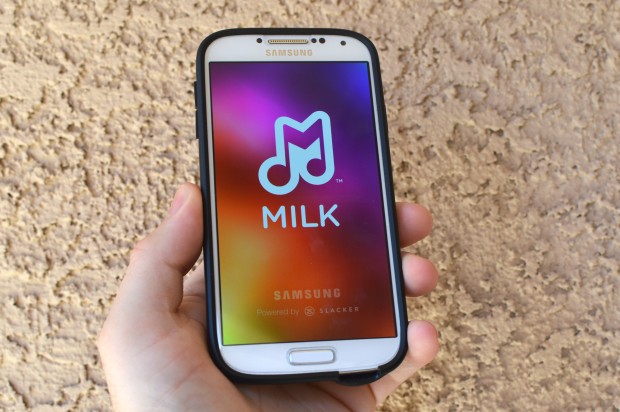 Now as we said above, there’s plenty of free music streaming radio apps on Android. Most of which limit the number of songs, have ads throughout the day, or want you to pay a monthly fee. Taking on iTunes Radio Samsung’s new Music Milk looks to curb all that, and simply deliver free music to its loyal users.

There’s no registration or setup required, simply download the app on a Samsung device and instantly have access to over 200 radio stations, 13 million songs, and create your own custom radio stations in seconds. Remember, this is for Samsung high-end devices only. The list includes the Samsung Galaxy S III, Galaxy S4, Galaxy S4 Mini, Galaxy S5, Galaxy Note II, Galaxy Note 3 and the Samsung Galaxy MEGA. 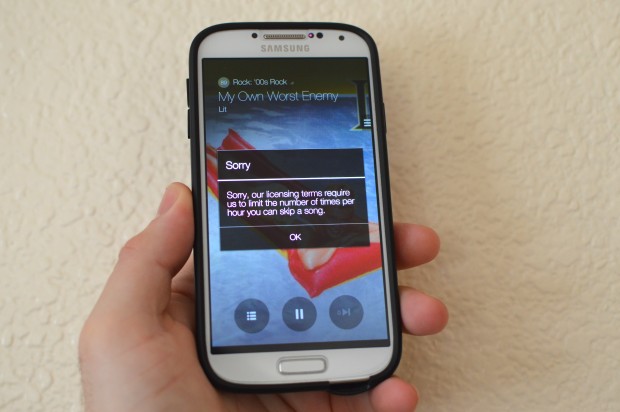 Above you’ll notice a screenshot saying “Sorry” which we received while trying to fast forward through songs we didn’t like. Since this is Slacker Radio, and you’re not paying, the service only allowed users to skip 6 songs per hour, which is a bit of a bummer. It’s completely free, but there’s still some restrictions.

Overall the user interface is pretty neat, but can be confusing at first. Allowing users to select a genre, or simply twist a wheel to instantly change tracks, which start playing almost immediately. There’s a strong focus on music discovery here, which is pretty neat. You may want to be careful or use WiFi, as this could drain a 2-5GB monthly data plan if used often.

INSTANT AND EFFORTLESS MUSIC LISTENING
• Stumble across new hits and old favorites with a turn of the dial.
• Music plays instantly, as you scan through stations.
• No registration or set-up required.

CREATE YOUR SIGNATURE SOUND
• Customize the dial to show only genres and stations you like.
• “My Stations” collects all the stations you love and those you create into a single station that’s easily accessible on the dial.
• Fine-tune stations based on popularity, novelty and song favorites.

If you read the fine print however, Samsung mentions that this will be ad-free “for a limited time” in which we expect the usual stream of ads that occasionally sound off during songs to surface on our Galaxy devices. Which is fine, considering you’re still getting a good music service at no cost to the end user.

If you have any of the Samsung Galaxy devices mentioned above, head to the Google Play Store and get the all-new Samsung Milk Music iTunes Radio competitor today.