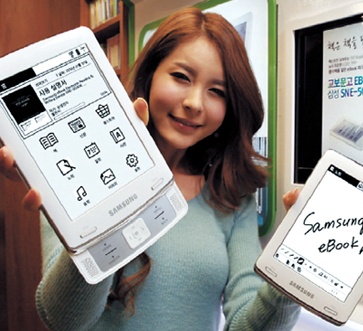 The new wave of eReaders with pen input has started to trickle into the market, at least in South Korea. There, Samsung has introduced their SNE-60K 6″ eReader with wifi connectivity and pen input via active digitizer.

This e-ink device offers handwriting recognition. Not sure whether that makes your scribbled notes searchable, enables text input, or both, but it definitely adds an advantage overwriting on paper. Slider design hides away navigation buttons when you just want to read or write. Also includes Bluetooth and MP3 playback. Onboard storage is not stated but was previous reported to be 2GB.

At launch in Korea, their content partner is Kyobo Book Center; only known U.S. content partner is Google. Price is 429,000 won,  roughly equivalent to $375.  No word on release elsewhere yet, but let’s hope the pen input is welcomed as a compelling feature.

Via Engadget >E-Reader-info.com > The Korea Herald