The Samsung Galaxy S III may be followed by a smaller cousin if Samsung has its way. The South Korean Android smartphone-maker may be unveiling a smaller counterpart to its popular flagship in the form of the Galaxy S III Mini on October 11th if rumors pan out to be true. An invitation for the event was obtained by All About Samsung with the heading “so gross kann klein sein,” which translates to “the size may be small” in English. 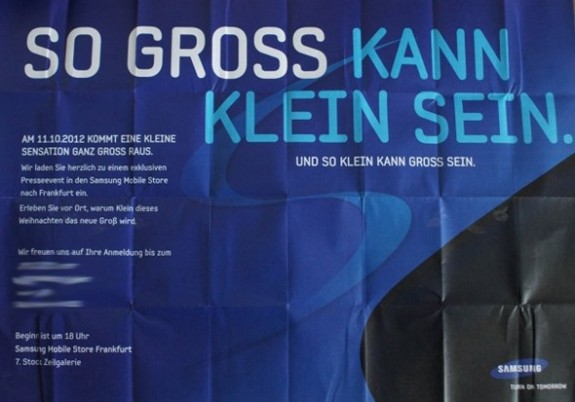 Samsung has historically been known to offer a huge product portfolio with differing devices for different users, unlike rival Apple’s one size fits all strategy. Rather than force users into a specific set of specs, Samsung has offered differentiated smartphones and tablets spanning different screen sizes, processor specs, resolutions, and memory configurations.

No specs or information is currently available for the rumored Galaxy S III Mini. The phone will likely offer competitive specs with a smaller display than the the 4.8-inch HD display employed on the flagship Galaxy S III. A more compact size with powerful specs may allow Samsung to compete against and target Apple’s iPhone 5 directly–that device has a 4-inch display that Apple says makes it easy to operate in one hand.