Samsung may be looking to do what Apple and Microsoft have both done before it by opening its own branded retail experience. According to The Information, Samsung had already poached senior Apple store designer Tim Gudgel as it contemplates its next move into crafting its own retail stores.

Currently, the South Korean electronics giant doesn’t operate its own stores. Instead, it relies on others to sell its products, placing its wares inside stores from Microsoft and smaller retailers. Additionally, through a recent partnership with big box retailer Best Buy in the U.S., Samsung had created a store-within-a-store, bring a department store model to electronics retail by claiming a section of Best Buy where it operates its retail experience.

The move to hire Apple’s more senior store designer could signal a shift from that strategy as Samsung plans a broader retail expansion. Rival Sony already operates a number of retail stores throughout the U.S., and Samsung’s store would likely compete with Sony’s, Microsoft‘s and Apple’s. 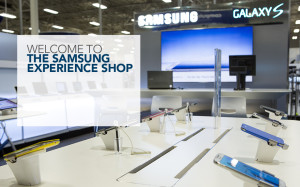 Additionally, wireless carriers in the U.S. are starting to upgrade their retail experiences with AT&T Mobility and Verizon both creating lifestyle stores. These destinations will compete for sales with Samsung’s own stores, if Samsung launches its own stores, in reaching mobile customers for Galaxy phones and tablets.

Google is also planning a retail experience, though Google’s stores may be more mobile as they are floating barges.

With the Apple Store, Apple had found unprecedented success. In addition to generating goodwill through helpful staff, useful services through the Genius Bar, and an opportunity for customers to interact with Apple products at a time when the PC market was dominating market share, Apple also generates a lot of money through its stores. Based on a per-square-foot calculation, it has been reported that Apple generates more revenue per square foot of retail space than luxury brand Tiffany & Co. does for its jewelry stores.

Rival Microsoft opened a similar retail experience to Apple, but Microsoft’s stores so far have not been as busy as Apple’s. Additionally, Microsoft’s stores create more barriers to sales than Apple. With Apple, you can just swipe your credit card at checkout and be on your way whereas Microsoft requires more personal information before the company will allow you buy at their physical stores, including handing over your name and email address. Hopefully, Samsung’s stores won’t come with the same barriers, especially in a time when sentiments about privacy are at a high given activities with the NSA in the U.S.