Samsung may be working on an 8-inch panel with a full HD 1080p display to combat the likely arrival of an updated Apple iPad mini with Retina Display later this year. According to Sam Mobile, Samsung’s Super AMOLED display with a 1920 X 1200 resolution will debut this fall at the IFA 2013 conference in Germany. The 8-inch tablet, potentially named the Galaxy Tab 8.0, would become Samsung’s second tablet to utilize the company’s Super AMOLED panel after the original Galaxy Tab 7.7. 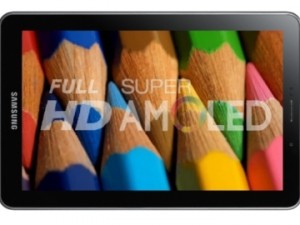 Though Samsung currently is positioning the recently launched Galaxy Note 8.0, a device with a 1280 X 800 (720p) display against Apple’s current iPad mini, the new 8-inch panel with full HD resolution will be used to combat a potential 7.9-inch screen used by Apple for the iPad mini successor. The Retina Display will have a resolution of 2048 X 1536, which would mean it will still have more pixels than a full HD panel by Samsung. However, Samsung will likely leverage the high contrast, vivid colors, and power efficiency of its Super AMOLED technology as key selling points when fighting the marketing behind Retina Display.

In the smaller form factor segment, Samsung will be giving Apple’s iPad mini and Google’s nexy-generation Nexus 7 slate a run for their money.